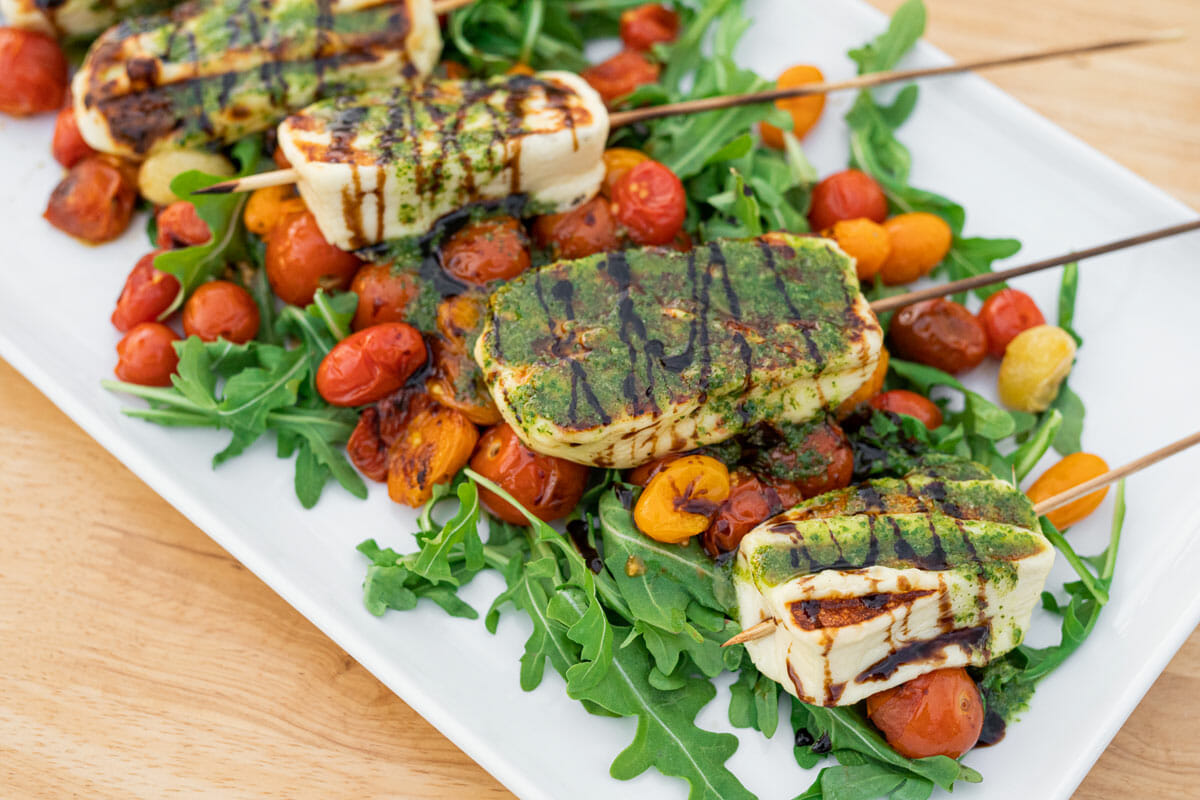 Move over Halloumi, there’s a new grilling cheese in town and it’s called Queso de Freir (Frying Cheese!). This recipe came about as I went to look for Halloumi for a recipe I was developing over for my friends at Walmart/Kingsford/Masterbuilt (you’ll see the videos for that soon!) and couldn’t find it locally so I tried Queso de Freir instead and it was AMAZING!

What is Halloumi Grilling Cheese?

Grilling cheese is a cheese that has a high melting point and therefore won’t melt on the grill. Halloumi is traditionally used for grilling cheese. Halloumi is a sheep and goats milk cheese (sometimes cows milk too) that comes from the Mediterranean country of Cyprus. Just like how Champagne can only be called Champagne if it comes from that region of France and is legally protected by Protected Designation of Origin, so is Halloumi. Ie, if it doesn’t actually come from Cyprus, it cannot be called Halloumi.

Halloumi often becomes available seasonally and can often be expensive. When I went to originally look for Halloumi to try grilling it, it was $15.00 at Whole Foods for a small block of it. Because I was doing this cooking demo for Walmart I decided to try Queso De Freir instead because that was available in the Hispanic section at Walmat. What a great discovery!!

What is Queso De Freir? 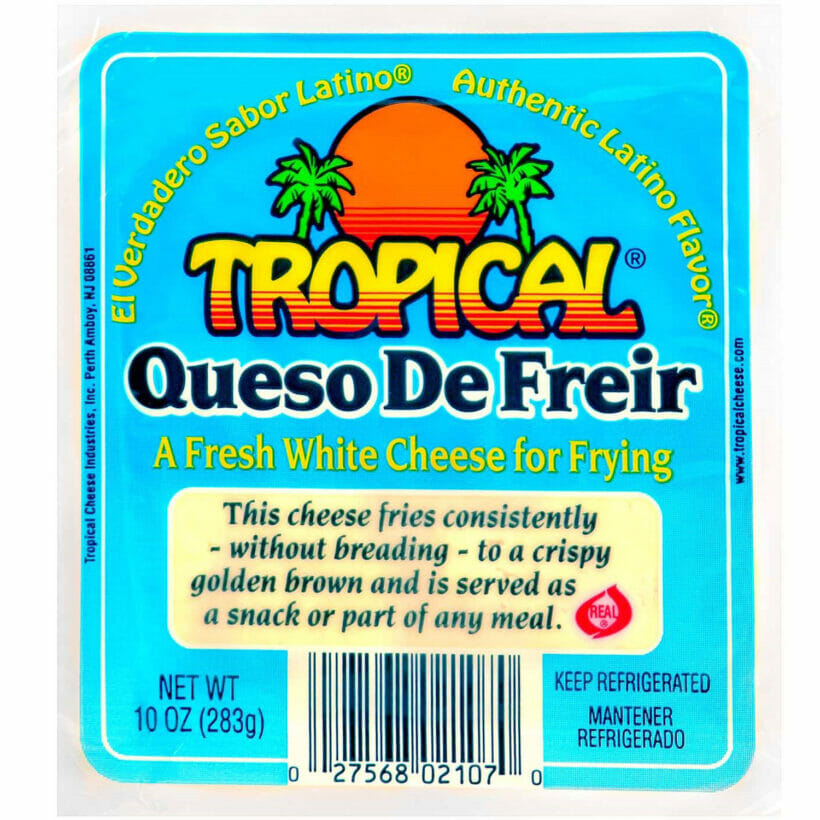 Here is what Cheese.com has to say about Queso De Freir:

“A variation of Queso Blanco, Queso Para Freir is a firm and mild Hispanic cheese commonly used for frying. Although often compared to Greek Kasseri and Cypriot Halloumi, this cheese differs in texture. It has long been a staple in Central America and the Caribbean where it is appreciated for its high melting point and mild flavour.

Queso Para Freir can withstand high temperatures and still hold its shape without melting. Frying or pan-searing will soften the cheese and result in a golden brown crust with a creamy, unmelted interior.

A slice of this cheese goes well with sandwiches, casseroles, appetizers or as an accompaniment to meals. It tastes great when crumbled onto fruit and salads.”

Queso De Freir is an inexpensive alternative to Halloumi and it is also delicious. The first time I made this recipe my husband was amazed “What did you put on that?” and I said nothing, I just threw it on the grill. It is naturally salty and grilled up golden brown on the grill and creamy on the inside.

In this recipe, I put the cheese on skewers and grilled it up, hence why I called it “Grilled Cheese on a Stick”. I also paired this with skewered cherry tomatoes and put them on an arugula salad that I finished with balsamic glaze and basil infused olive oil. The mix of the salty cheese with a golden crust finished with a touch of the sweet balsamic glaze is pure tastebud perfection!

Grilled Queso De Freir is great as an appetizer or an entree because it is high in protein so it is a great meat free option at your next cookout. For meat eaters and non meat eaters alike, this dish is a crowd pleaser!!! 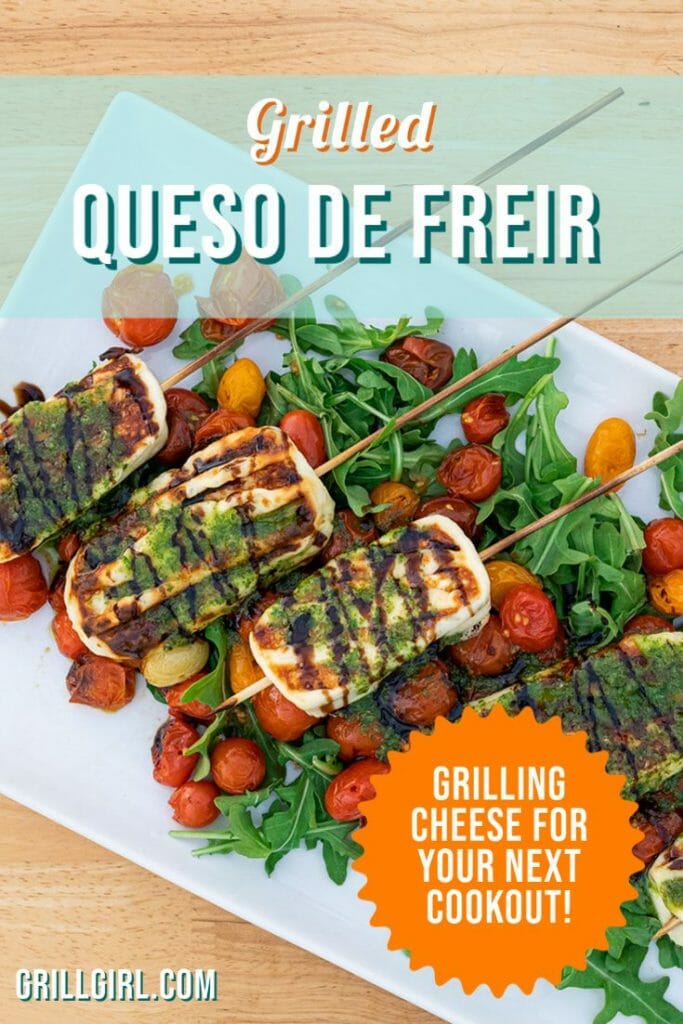 Want more ideas to spice up your salads? Check out these recipes!