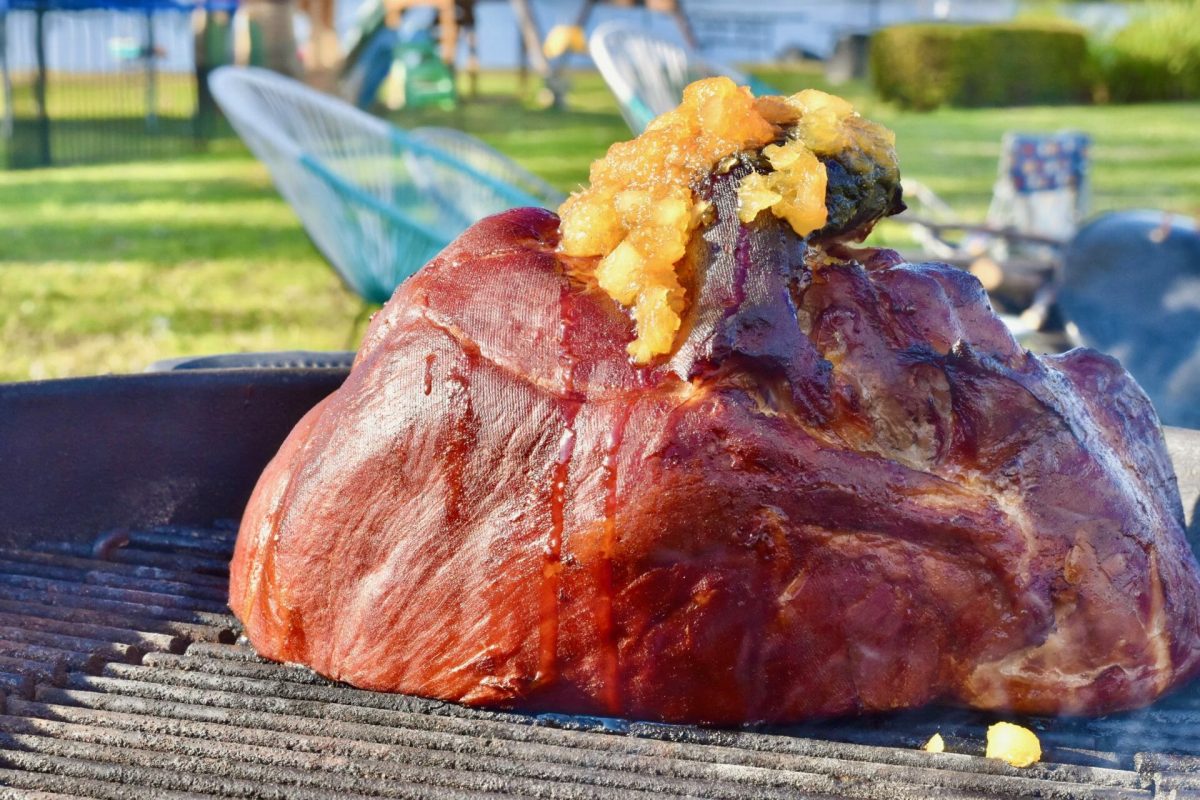 If you are looking for a smoked ham with glaze recipe, well then you have come to the right place because this Twice smoked ham with pineapple ginger glaze recipe is a winning recipe that you’ll want to bookmark to make again and again on your grill or pellet smoker.

But first, what does it mean to be “Double Smoked?”

When you buy a ham at the grocery store, you are most likely buying a ham that has already been cured, smoked, or baked. So, when you go to smoke a store bought ham, you are most likely smoking it again, hence why this recipe is called double smoked ham. I created this recipe for glazed ham for my friends at Kingsford to showcase the power of smoke on everyone’s favorite holiday meal – ham!

Putting your ham on the smoker is the best way to infuse it with smoke while also heating it up at the same time. While most people will just think to throw their ham in the oven, this is a missed opportunity to add Kingsford smoke flavor. In this recipe, the ham is smoked on indirect heat until it reaches an internal temp of 145 degrees, which takes only about an hour and 20 minutes for a boneless ham.

I made this ham on my Weber Kettle where I set up direct and indirect zones, but if you are smoking ham on a Traeger or pellet smoker, then all you need to do is crank it to the temperature of 250 degrees. 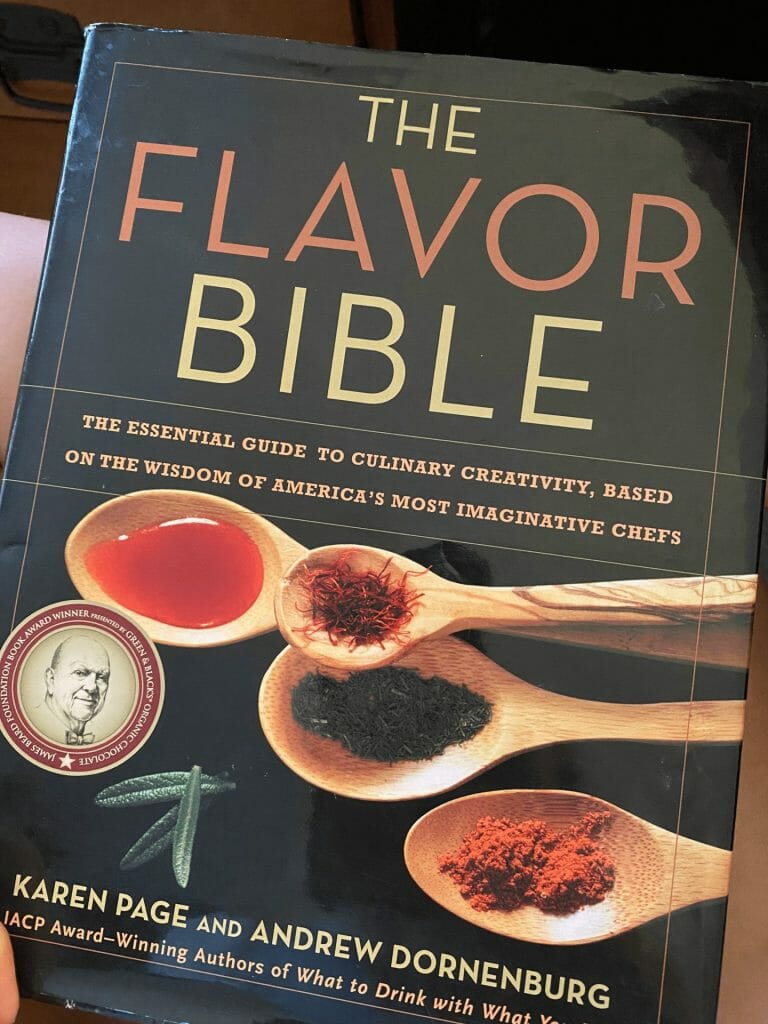 Let’s talk about flavor profiles for a hot second before we get into the recipe. Why do people associate a ham glaze recipe with pineapple? Why does Pineapple go so well with Ham? If you’ve ever wondered why certain flavors go exceptionally well with others, then I recommend you check out my favorite of all favorite books for making me a better recipe developer – The Flavor Bible.

Funny story, I discovered the Flavor Bible as a recommendation from a Blogger friend before I went to compete on Chopped Grill Masters. I was very early on in my blogging and grilling career and that was quite an adventurous move on my part. Obviously I did not win Chopped Grillmasters but this book has been an invaluable tool in my recipe development career! 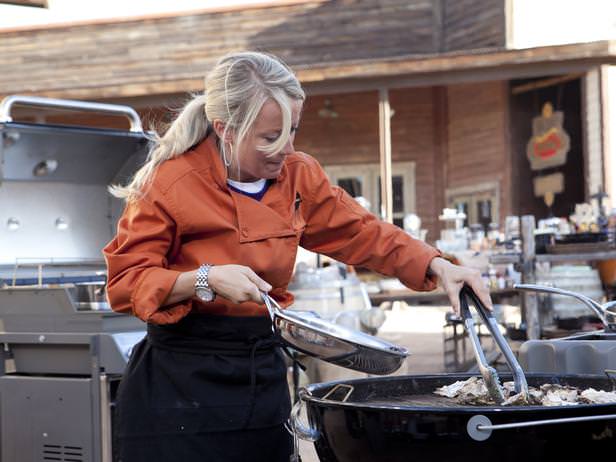 Here I am competing on Chopped Grillmasters- needless to say I got chopped but it was a cool experience!

This book gives flavor pairings of known ingredients that compliment each other so as a cook you can think on your feet when putting dishes together instead of having to rely solely on a recipe. This is also great for looking into that refrigerator and the hodgepodge of ingredients and trying to figure out what to make for dinner without having to make a run to the grocery store. Buy this book, you will thank me later! The only book I reference more than the Flavor Bible is God’s instruction manual, also known as The Bible. 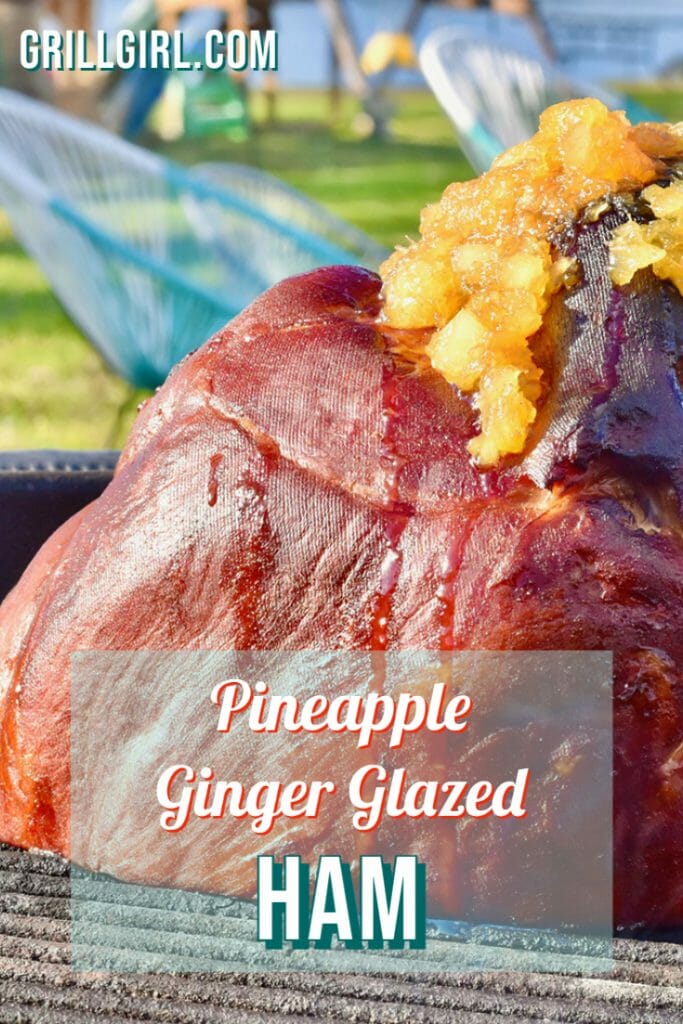 Using this book has helped me navigate ingredients that pair well with each other, such as the combination of salty and smoky ham with the sweet kick of the honey ginger pineapple glaze.

And Using the Bible has helped me navigate life. And if you want to hear how God has worked in my life and I have beyond a doubt no question as to the existence of God and how he is working in my life to make amazing things possible, then I suggest you check out this impromptu testimonial I gave on instagram the other day. And believe it or not I shared this all because of a newborn kitten that came into my life a few weeks ago, which sparked me to share my story of Gracie, the cat that God gave me a few years ago after the death of my dog Connor which was a tragic event in my life. As a dog lover and self proclaimed non-cat person, this just goes to show God’s love, as well as his amazing sense of humor. 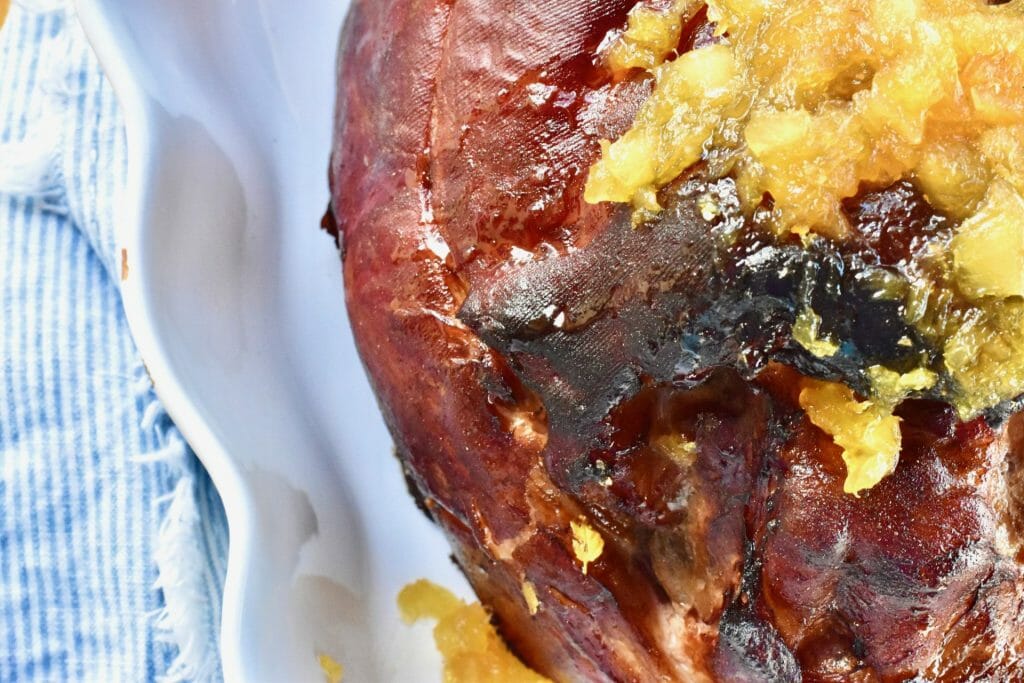 And as a side note, if you are reading this, it is most likely because of looking up an Easter Recipe and this is a good time to remind you that Easter is about so much more than Easter Bunnies!  Let’s remember the reason for the season!

So, let’s get back to the ham!

This ham is paired with a ginger pineapple glaze that goes on at the end, in addition to a nice dollop when serving. And, to take this recipe a step further, this ham will be the gift that continue to give if you make my Ham Biscuits with Carolina Gold BBQ Sauce for biscuits and brunch. Be sure to check out that recipe here because it will help you repurpose leftovers OR also make this ham go further when serving a crowd!

Without further ado, let’s smoke some ham! If you give this recipe a try, definitely let me know what you think! And if you are making this ham for a big crowd and doing a full ham, not a half ham, then DOUBLE THE GLAZE RECIPE! It is always good to have more glaze versus less.

Pro tip: Ham goes great on a biscuit with honey mustard or Carolina Gold style BBQ sauce for breakfast or brunch the next day. Leftover ham is a great for addition to omelets, quiche or adding extra flavor to leafy vegetables like collard greens!

Did you like this recipe? Try out some of my others!