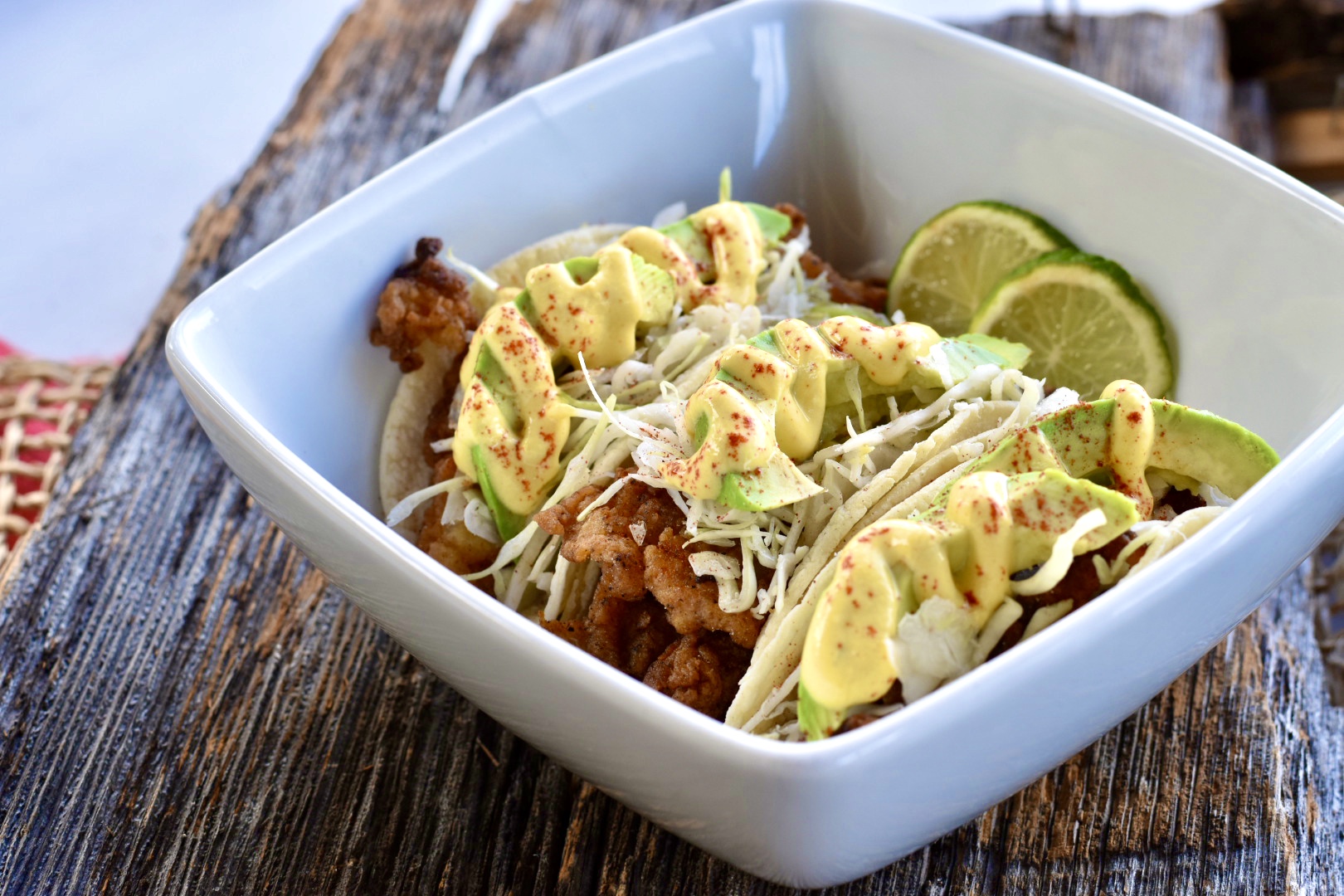 Never in a million years would I have imagined I’d be typing up an Iguana recipe, moreover, telling you how delicious Iguana is, especially in taco form. But, nonetheless, here I am telling you that Iguana meat tastes like chicken, but better!

Let me start out by saying that I realize many people have Iguanas as pets and will be offended by this post. I also think Iguanas can be cute. However, this recipe was born out of necessity as we in Florida have an overpopulation of invasive, non-native Iguanas, with Fish and Wildlife giving the okay to kill Iguanas humanely to combat the problem.

A little bit about iguanas

Iguanas in Florida have no natural predators, often carry salmonella, eat sea turtle eggs, and can cause damage to sea walls and vegetation. In fact, Puerto Rico had an Iguana Epidemic, damaging crops to the point where they had to launch a campaign to (humanely) cut down on the population.

About 5 months ago, my girlfriend admitted to me that she had killed about 10 Iguanas in her backyard. Since they were pooping all over her car and playground equipment, it had gotten out of control.

I posted about this on my Instagram handle and said I felt like I was in a Carl Hiassen novel because my girlfriend was shooting Iguanas with a pellet gun, I had an Alligator living in my backyard, and we recently shot a wild boar on our property. Something to the effect of “#floridaproblems” lol.

After I posted this, some of my Instagram friends from South American responded that Iguana meat is delicious, much better than chicken, and many of them had Iguana stew recipes they would share. I was totally surprised! In addition, some of my Florida friends on Instagram shared with me that there were so many Iguanas where they lived that they had a separate freezer to keep the Iguanas in until trash day.

From this, an idea was born. I decided I wanted to try eating Iguana. I figured it seemed like a lot of wanton waste with people killing them as an invasive species and then letting the meat go into the trash.

There is not an overpopulation of Iguana where I live, but in nearby places, there is. Since I didn’t have a lot of Iguanas around, I reached out to Nick, who owns Nick’s Nuisance Wildlife and Bee Removal in the Fort Myers and Cape Coral Area. He told me he had removed over 90 Iguanas in one neighborhood in one day, wow!

Nick was kind enough to give me 2 Iguanas to cook with to try for myself. The ones he gave me were already frozen, however, many recipes online show people removing the head and feet and then removing the skin and guts. After that, you are left with loin, tail and leg meat, with the legs tasting similar to chicken wings.

I decided to make tacos with one of my smallish Iguanas. First, I dredged the meat in a flour mixture mixed with Cajun seasoning to add a touch of spice. Then, I paired these with a Mexican Crema mixed with Aji Amarillo, a Peruvian Yellow Pepper paste, for South American Flavor (If you are a fan of Peruvian food like me, Aji Amarillo is a staple in Peruvian cooking and you can buy it in any Latin Grocery Store or on Amazon).

The tacos were finished with a drizzle of the Crema, lime juice, cabbage and avocado for South American Flavor that pairs perfectly on this delicious white meat! 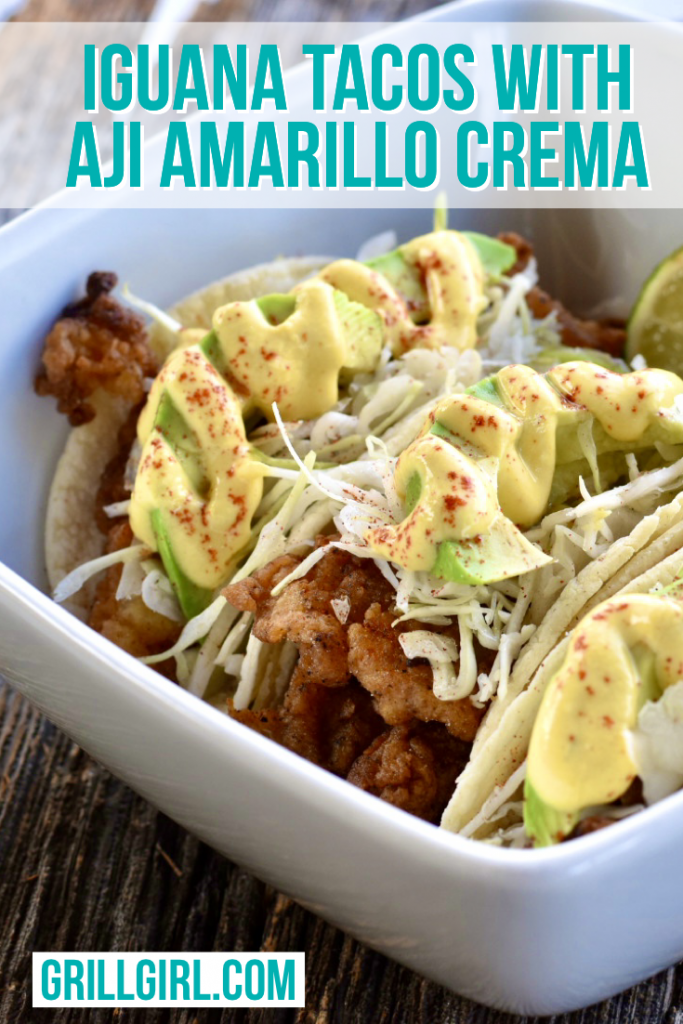 Iguana is an invasive species in Florida that has gotten out of control since they have no natural predators, so much so that Fish and Wildlife have allowed people to humanely kill them. They are called “Chicken of the Tree” in Latin American, prized for their mild white meat, and are great in many dishes, like these Latin American Inspired Iguana Tacos.

Prepare a Cast Iron Skillet for Frying- heating it up to a temperature of 350-375. I like to use a Thermapen to make sure I am at the right temperature for frying.

Dredge your meat in the flour mixture. Once the oil is heated up, add the Iguana and fry it, flipping halfway through to evenly cook both sides. Remove and let dry on a plate coated with a paper towel.

Combine the Crème or Sour Cream with the aji Amarillo paste to make the sauce.

Add your meat to the tortilla, layer with cabbage, avocado, the Aji Amarillo crema, and squeeze the lime at the end, finishing with a dash of smoked paprika for additional color (this part is optional).

If you have an Iguana Problem, don’t throw them in the trash- try this recipe! Don’t let this food source go to waste when they are good eating!

Have you ever tried Iguana? Leave me a comment below! Don’t forget to Check out my Lionfish Ceviche Recipe, another invasive species that is devastating the biodiversity of the ocean, and can now be purchased at Whole Foods In Florida!!! #eatemtobeatem !!!