How to Season and Care for Cast Iron Cookware 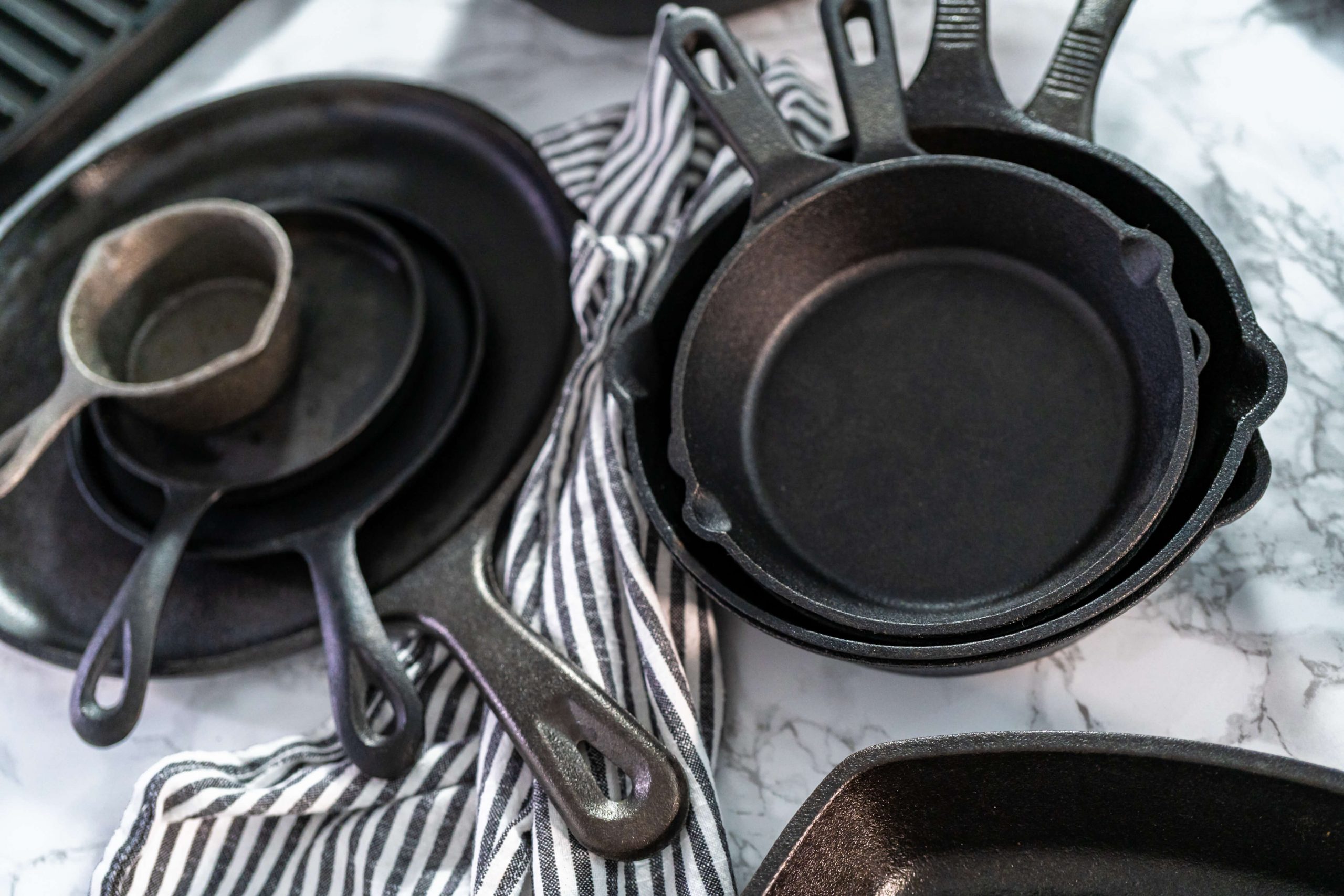 I love cast iron cookware. It lasts forever, is easy to maintain and beautiful to look at. I have an odd collection of new and old skillets and Dutch ovens. I absolute love to cook them. One of my all time favorite pans is a deep side thin wall #8 skillet that was my Grandmothers. I can’t help but think of her as I hold the handle. It’s like I’m holding her hand as I cook.

Cast iron cookware has been around for a very long time.  It originated in China some 1800 years ago.  The production methods for cast iron cookware made it to Europe by the 15th or 16th century, depending on who’s book you read.  Either way it’s been around a while.  Cast iron took a bit of a break from the main stream in the 20th century as  new “modern material” like aluminum took center stage in the cookware markets. Recently cast iron has made an amazing comeback into the kitchen. It’s easy to understand why.

Another aspect of Cast Iron that is great is that it is also great not just for using in your oven but over a campfire or on your grill! We’ve been a big fan of cast iron cooking at GrillGirl.com for a long time for this very reason!

Let me give you a bit of information on how to season and maintain you new cast iron pan.

What is cast iron seasoning?

Seasoning on a cast iron pan is basically adding a layer of baked oil on the pan. This process is known as polymerization.  This layer creates an easy release cooking surface, prevents the pan from rusting and gives it that beautiful classic black shine.  With proper care this layer buds up over time making the pan easier and easier to use and clean.  The steps to season and maintain your cookware are extremely simple and take virtually no time at all.

Most modern day cast iron pans come pre-seasoned. This means that a layer of oil has been applied at the factory to prevent the pan from rusting and making the pan ready to go right out of the box.  While a pre-seasoned pan is ready to go it never hurts to add a layer or two of oil to make it even more stick resistant and protected.

How do I do that? 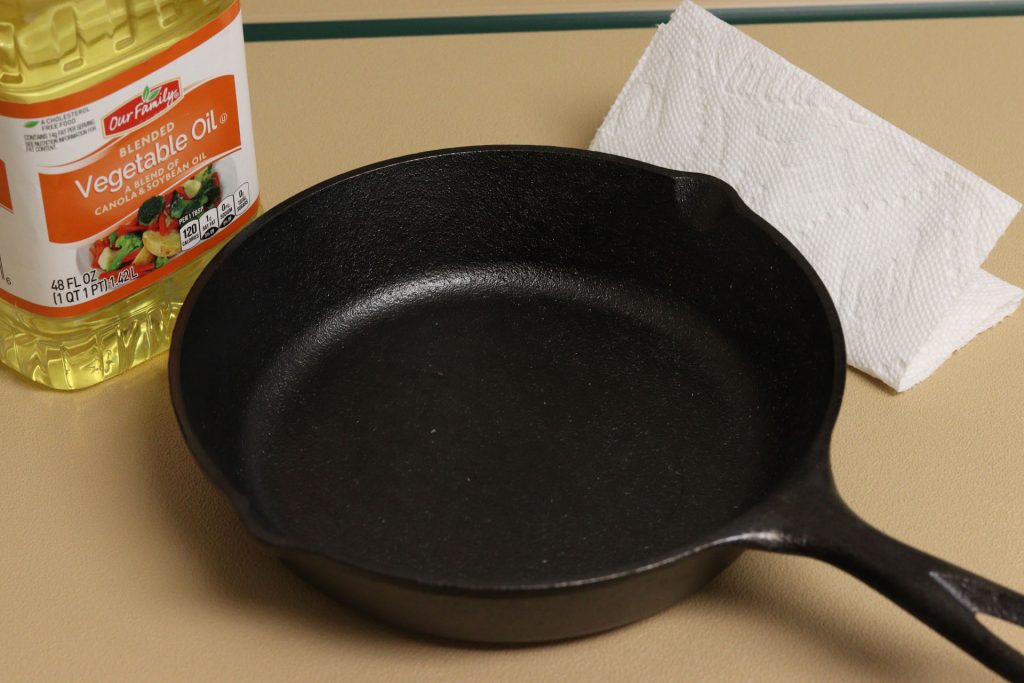 Preheat your oven to 350°f.  Give your new pan a wash in a small amount of soap and water. Towel dry the pan well. Add a small amount of oil to the pan. Roughly a tablespoon.  I talk a bit more about the oil here in just a few. Using a paper towel whip this oil all over the pan. Both inside and out.  Place the cast iron pan in the oven UPSIDE DOWN with a sheet pan in the oven one rack below.  Bake for an hour. At the end of the hour just turn the oven off and let the pan rest in there until cool.   I like to repeat this process one more time just to get a really nice base established. 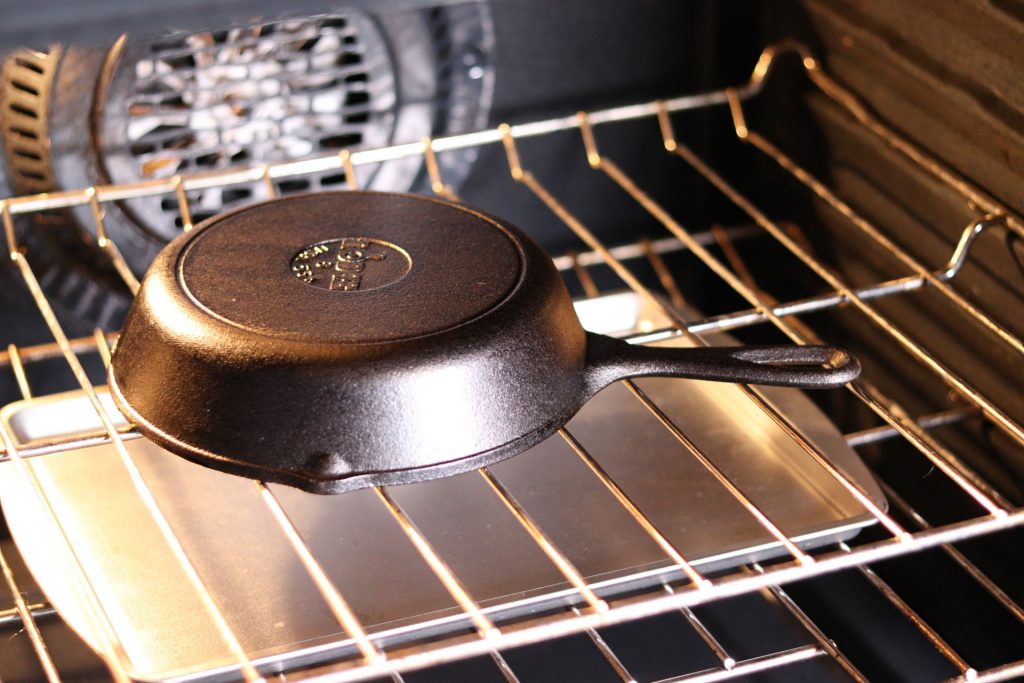 There is a lot of talk out there about the “best oil” for seasoning cast iron. Really any oil can be used. I use an oil with neutral flavor and a higher smoke point. Canola, corn, safflower, peanut, vegetable  are all fine choices. Use what’s affordable and on hand.  There are also products from a company called Crispee Puck  (affiliate link) made especially for seasoning cast iron.

Taking Care of Your Cast Iron:

Wash: Contrary to popular believe, you can use a tiny bit of soap but don’t use too much to avoid stripping the seasoning off your pan. Hand wash your pan after each use with a small amount of soap. You’re a pan scraper to remove stuck on food. Avoid metal scrapers or steel wool soap pads. I like plastic scrubbing pads. They are affordable and can be places in the dishwasher. You can also purchase a chainmail cast iron scrubber  (affiliate link) for this. Another easy trick for really stuck stuff is to simmer a little water in the pan for a minute or two then scrape or scrub it out once the pan has cooled. 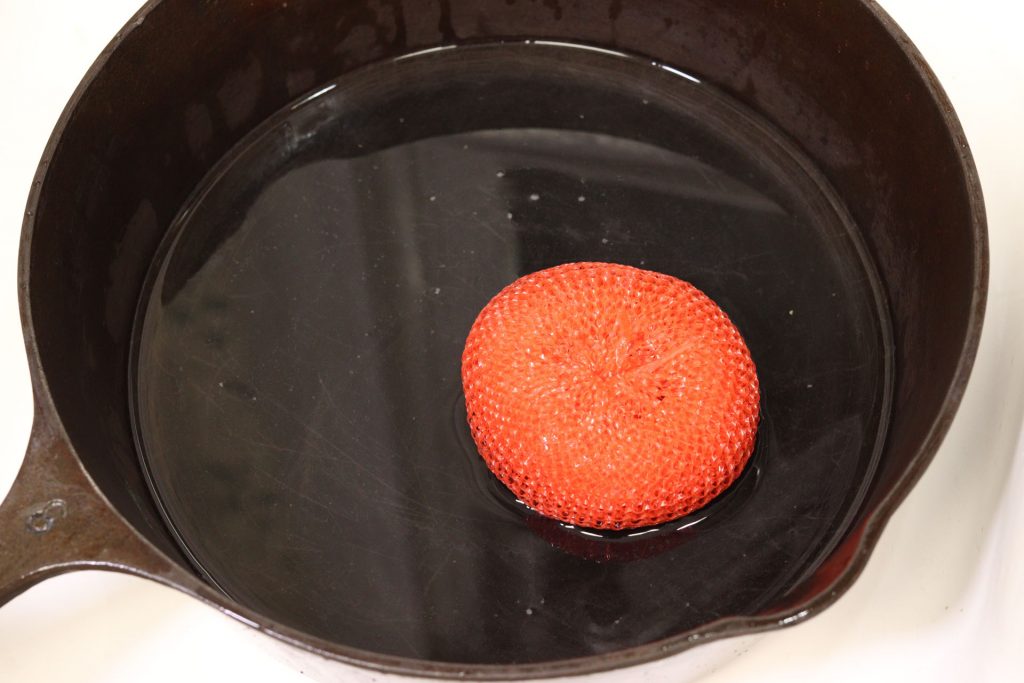 Dry: Dry the pan immediately with some paper towel. It’s not unusual to see some black or browning discoloration on this paper towel. That is normal.

Oil: Apply a light coat of all to the pan with paper towel until no surface residue of oil remain.  Store your cookware uncovered.

As in all things cooking there are a lot of ways to get something done. Taking care of your cast iron is no exception.  A lot of folks out there say never do this or that but if you follow the simple steps above you’re going to be alright.  It something bad happens you can always just strip off the seasoning and start over.  It’s that simple.  Cast iron cookware just wants to be used. Frying, sautéing, baking, it just wants to be in the game.  The more you use your cast iron that more you’ll love it.   Have questions about your cast iron? Leave them in the comments below.

Thank you so much for reading. Till next time happy grilling or should I say cast iron cooking!

Jon Solberg is the Resident “Eggspert”, Grill and Gadget Reviewer and Technical Consultant at GrillGirl.com. You can learn more about Jon below. 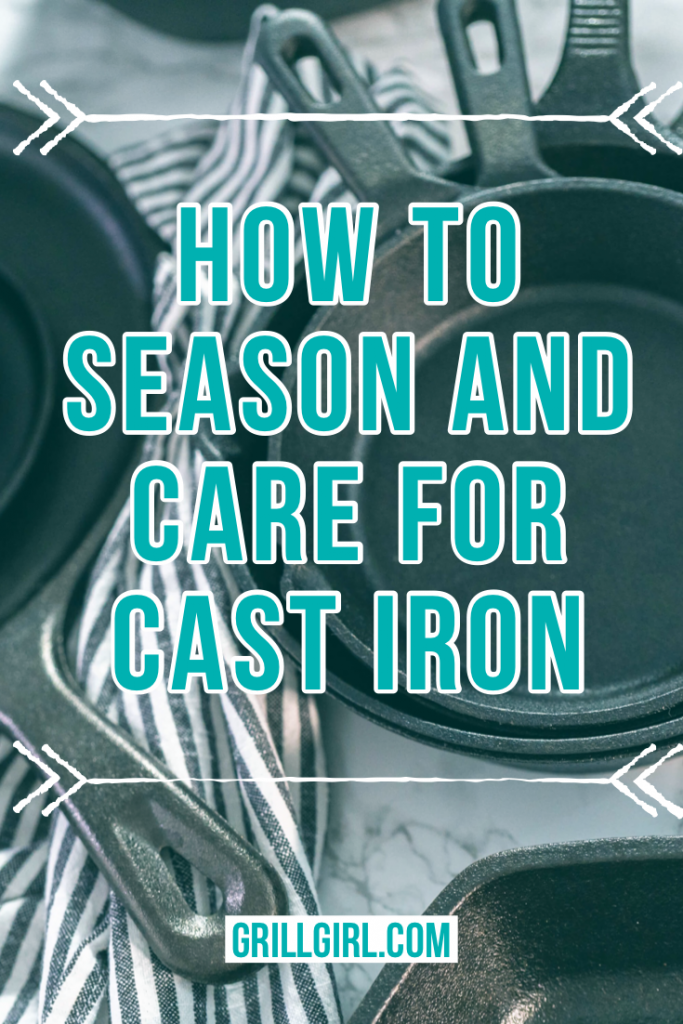 If you love to cook in cast iron, you’re in luck because we do too! Check out our Cast Iron cooking recipes below!