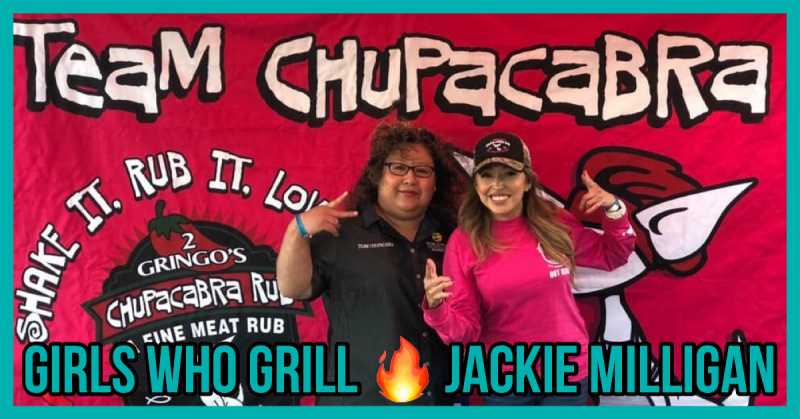 Jackie Milligan never thought she’d become a champion barbecue cook. Living in Texas, when she imagined pitmasters, she had visions of “big tall cowboys,” not herself.

She learned that what it takes to succeed on the BBQ competition trail has nothing to do with gender, age, or anything of the sort. Success comes from dedication and hard work.

Jackie has tons of both. 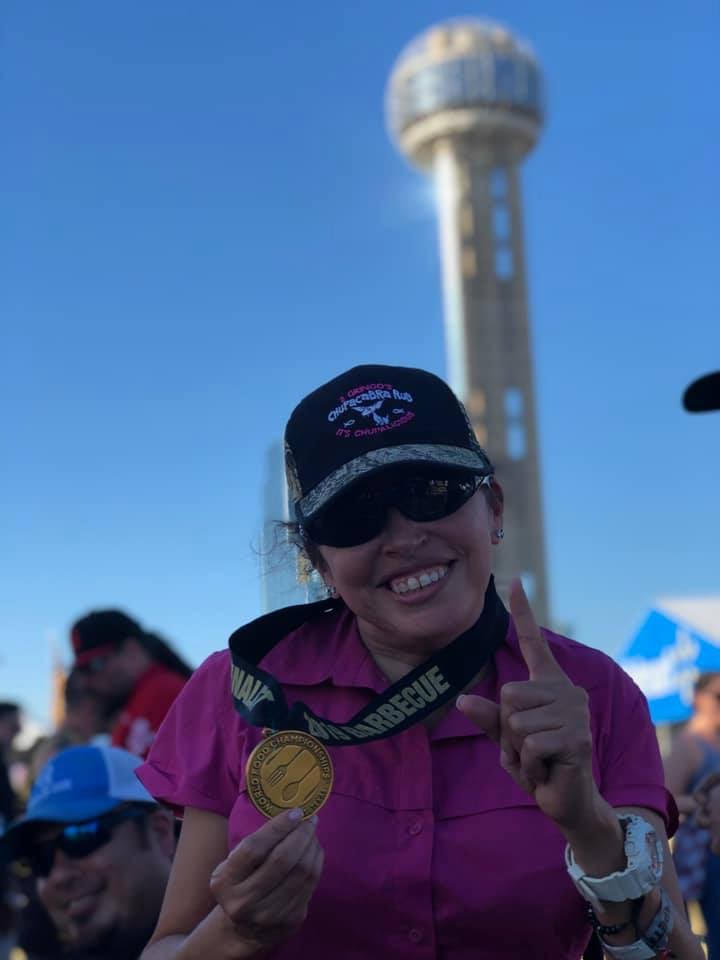 In her first solo barbecue competition, she won reserve grand champion. Jackie hasn’t slowed down since.

At the 2019 World Food Championships in Dallas, Jackie Milligan and her Team Chupacabra did amazing! She not only won the Cowboy Charcoal Fire Woman Challenge, but also the EAT portion of the WFC barbecue competition. Her team went on to place 8th overall in the World Food Champion’s BBQ competition finals.

The BBQ Central Show host Greg Rempe probably said it best when he featured the talented Texas cook on his podcast: “Jackie Milligan is WINNING EVERYTHING.” 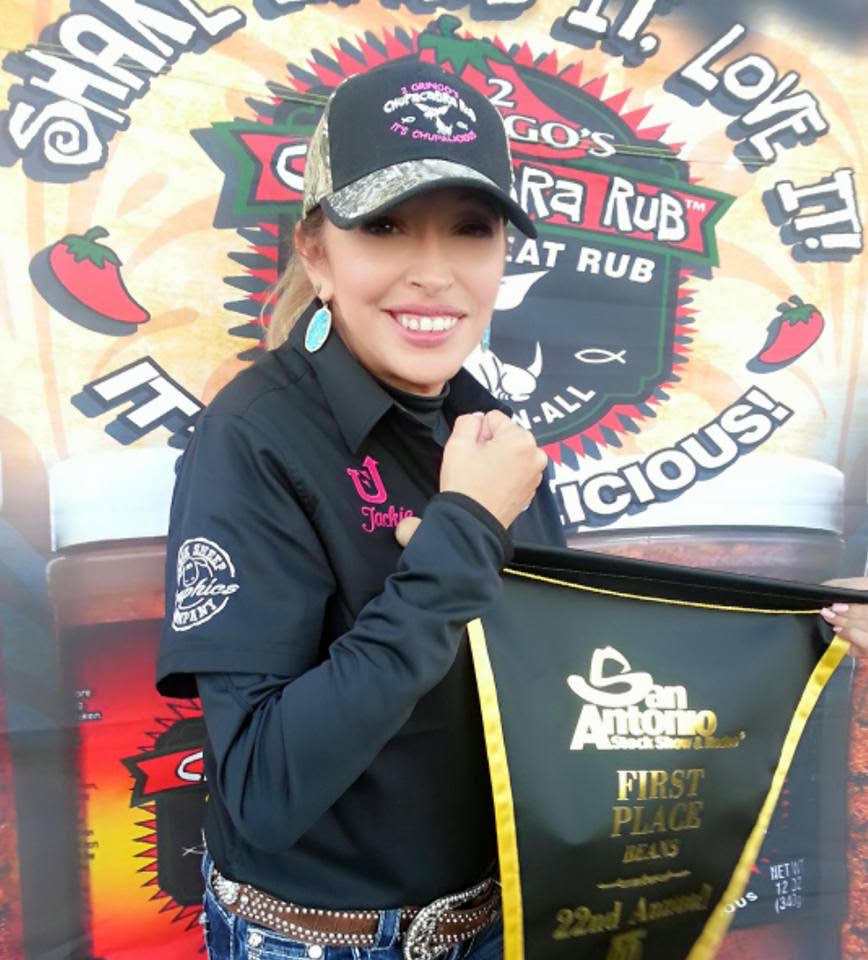 “I like to challenge myself,” Jackie Milligan said in her Girls Who Grill interview for GrillGirl.com. “And when I reach my goal, it’s not ‘oh, I can relax now.’ There’s always something new coming up. There’s always the next one, and the next one…”

“I’m always pushing forward. I’m happy with my results. I’ve been blessed. I’ve been so blessed.”

Let me know who you think I should feature next on GrillGirl.com! Get in touch at robyn@grillgirl.com. 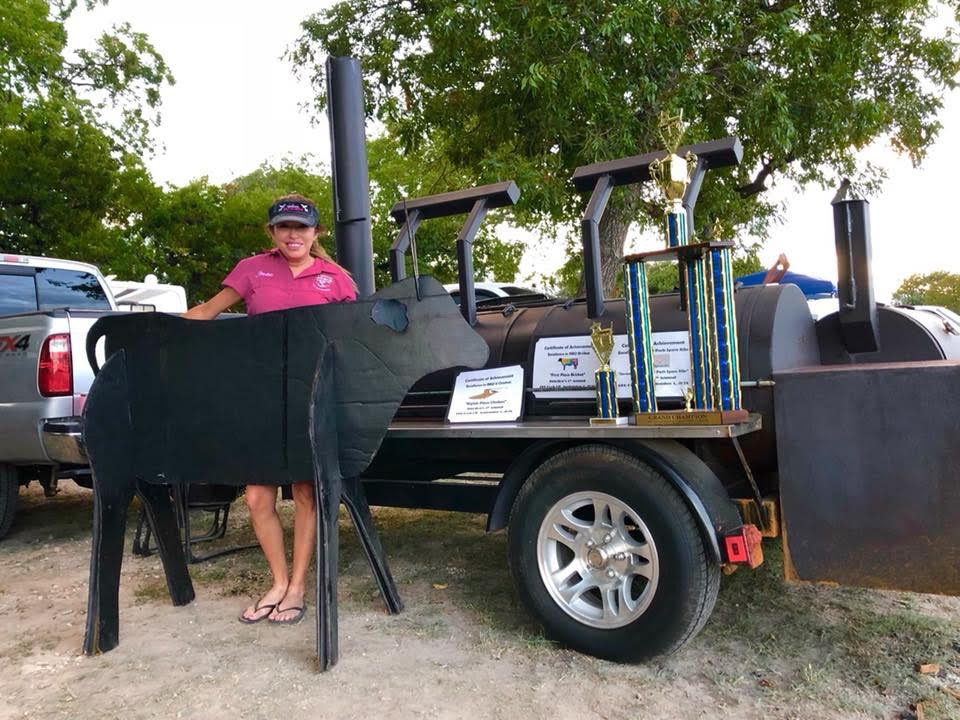 Girls Who Grill | A Chat with Jackie Milligan

GrillGirl Robyn: I was reading about you and it sounds like your husband started as the barbecue cook and then you have started to kick his butt.

Jackie Milligan: It’s been incredible. It’s been something that I’ve never saw myself doing ever. Because my husband started cooking way before I was even interested in being outside with all those guys.

I’m in San Antonio. And a lot of the cooks down here, they’re big tall cowboys.

Robyn: Oh yeah, for sure.

Jackie: At this cookoff years ago, they were hosting a kid’s competition for children ages 5 to I think 11. My husband said, I want to put (my son) Matthew in. I’m thinking, okay, this means I got to show up early enough at a cookoff to bring Matthew and get him ready and all that stuff.

I’m sitting there, and him and Matthew are bonding and doing really great. And I’m just sitting there flipping because it’s outside and it’s hot.

So, Matthew got in the routine of doing cook-offs. And (my husband) Tim said they’re having a dessert category, why don’t you think about entering it? First of all, I’m thinking to myself, yeah, I could do that. So I did a cheesecake in the barbecue pit and I won 1st place in my very first cookoff. 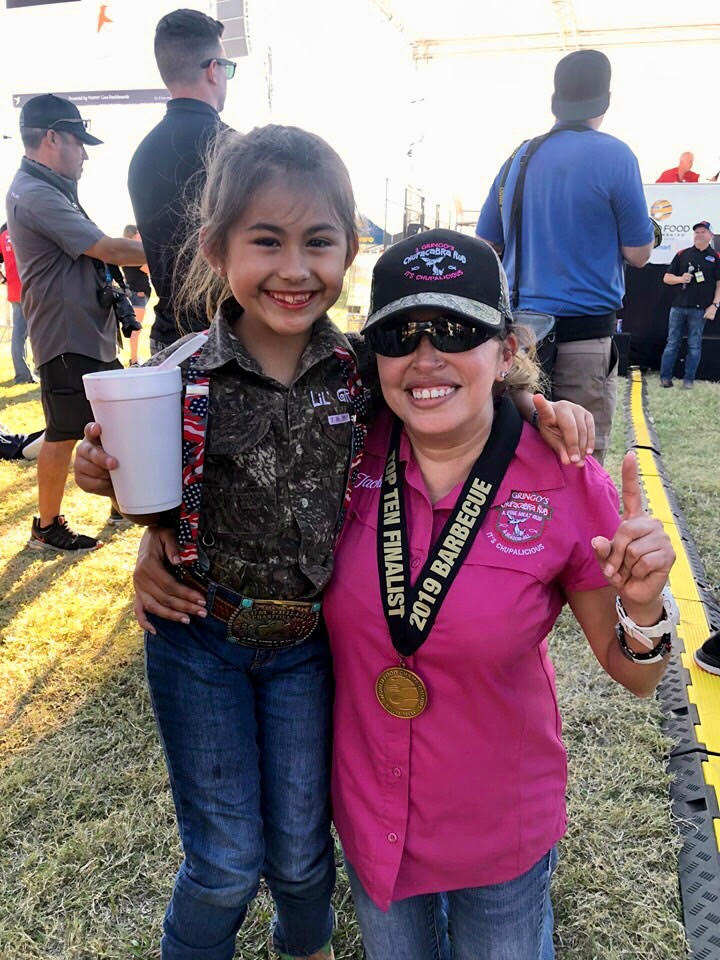 I built the courage to enter the Chef’s Choice categories, which pretty much you can cook whatever you want on the grill. I did that, and I got first place again.

“Then I looked at my husband and said, “OK, sign me up for a barbecue class, because I want it.”

Robyn: So you took a course and then you signed up for a competition?

Jackie: Yes. I was hooked. Ever since then I’ve been on a roll. You got to stay on your game. You got to keep learning new things, new ideas, new techniques. It’s a lot of work.

Robyn: That’s awesome. I’d love to learn a little bit more about the type of competitions you’re doing and what they entail.

Jackie: I am doing IBCA competition cooks. It’s the International Barbeque Cookers Association and basically, we do brisket, ribs, and chicken. We don’t do pork butts over here. And for chicken, it’s two chicken halves, nine ribs, and nine slices of brisket.

Jackie: Last year I did at least two, maybe one, a month for sure. And I finished overall in my region. I have finished 10th in region 3 for IBCA. I was really happy about that.

Overall, I think I was in my place. I had to pat myself on the back for that one because I have never worked so hard for anything in my entire life.

Robyn: And Texas is a big barbecue state, too. I’m sure the competition is pretty stiff.

Jackie: Yeah, basically, if you’re in Texas, you’re with IBCA or you’re with the Lonestar Barbecue Association, which is a smaller league, but still the competition is tough in either league.

“I’m always pushing forward. I’m happy with my results. I’ve been blessed. I’ve been so blessed.”

How many times have you beat your husband in a cookoff? 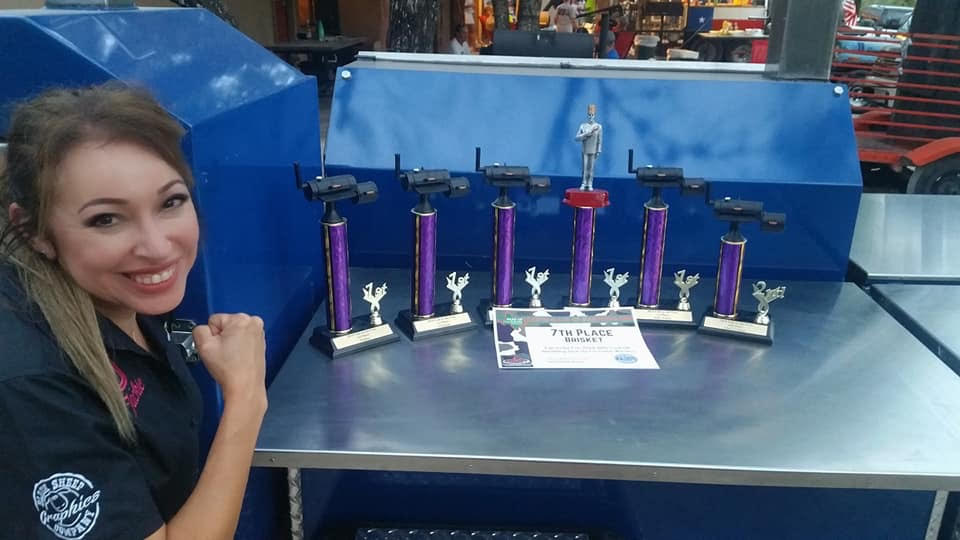 Robyn: Can you share some tips for those looking to really produce some amazing barbecue or grilled food?

Jackie: Having really good meat. That to me is one of the most important things — having good quality meat. It’s either going to make or break you. You can have the best rubs and injections and sauces and techniques, but if you don’t have a good piece of meat, it’s kind of hard to win a competition.

Robyn: If you start with crappy meat, you can’t expect much to come from it, right?

Robyn: For the females out there who never thought about grilling, what advice would you give to them? Or maybe they want to try grilling, but they might be intimidated.

Jackie: I have a Pitmaker BBQ Safe which I love. It’s user-friendly. It’s so easy. I don’t have to maintain a fire too much. It’s the easiest thing to cook with for me.

When I first started cooking, we were using Tim’s stick burner and that’s a lot harder to maintain fire if it’s not insulated. My Pitmaker Safe is my baby. It’s my go-to. I won a lot of competitions with her.

Robyn: I love the guys from Pitmaker, too. George and Victor are the bomb.

Jackie: They are, they are, they are. And I started cooking for Alton Paris, who owns 2 Gringos Chupacabra. I use all of his products and the winning meats are from Andy Lugo of Meat Hussler.

More women in the grilling scene

Robyn: It sounds like you’re the kind of person I would love (to have on my team). I would want you on my team because you have a track record of winning. I’d be like, ‘I want her, she’s mine.’ Are there trends you’re seeing out in the grilling circuit?

Jackie: I’ve seen there’s more of a trend of women stepping up because you’re in the kitchen anyway, cooking at home, coming up with recipes, and doing grocery shopping.

I would say that there’s more women out there and that’s great. That’s what I’m seeing down here in Texas anyway.

Robyn: No, it’s true! I dabble in some competition cooking, too. My site has always been about trying to bring grilling to women. Like, if the dudes can do it, you can do it too, right?

We’ll have to check back in with you every so often so people can hear about how often you beat your husband in the various BBQ competitions you guys do.

Jackie: He’ll kill me when he hears this.

Robyn: Hopefully he’ll be proud of you. I know my husband and I also have a nice little rivalry because he’s actually a pretty good griller and he always makes the joke that he’s a better steak griller than I am.

Are there any parting thoughts that you want to share with everyone as they embark on their cooking journey?

Jackie: Set goals for yourself. That’s my number one. I even tell that to my son. I tell him, ‘Matt, you set goals. Don’t give up if things don’t go OK, or right the first time. There’s always another cookoff coming up. The possibilities are endless.

And do your research. Take a BBQ class. Learn as much as you can about what you’re cooking and what you want to do. Have a plan.

There’s technique, there’s not giving up, and there is practicing. I practice, I would say, at least twice a week before a cookoff.

Jackie: At the day of the competition, it’s go time. If you’ve done all your homework, you’ll be OK. 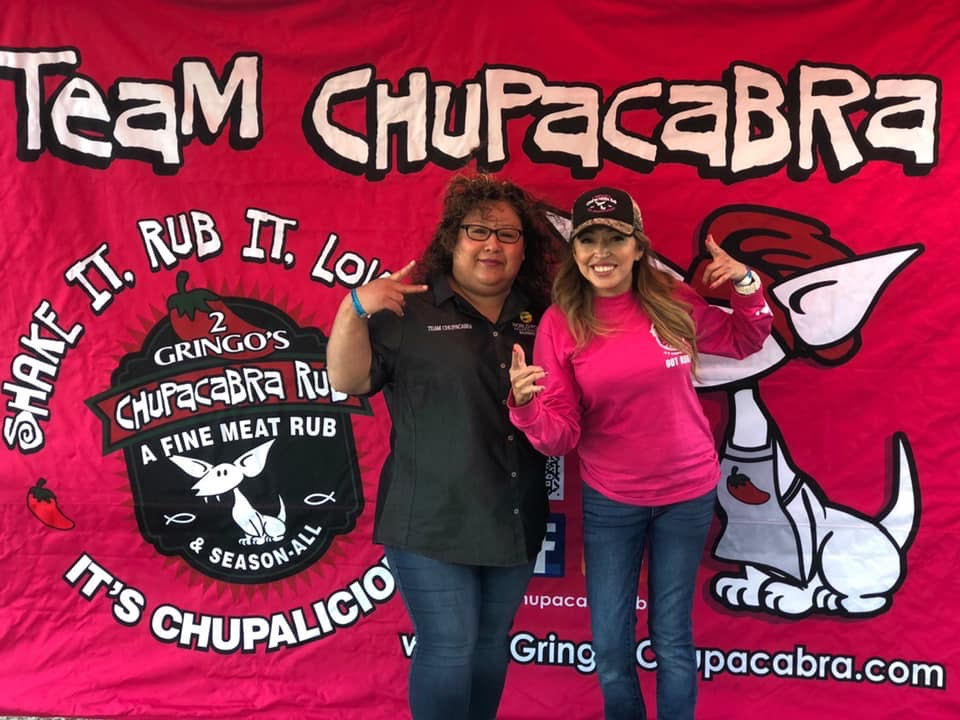 This is the first in a series of GrillGirl interviews showcasing the amazing female talent in the barbecue and grilling community.

Grilling is for everyone.

Our mission at Team GrillGirl is to bring more people into the #BBQfamily, female or male, young or older, experienced or novice. Everyone should be invited to enjoy the glory of live-fire cooking. 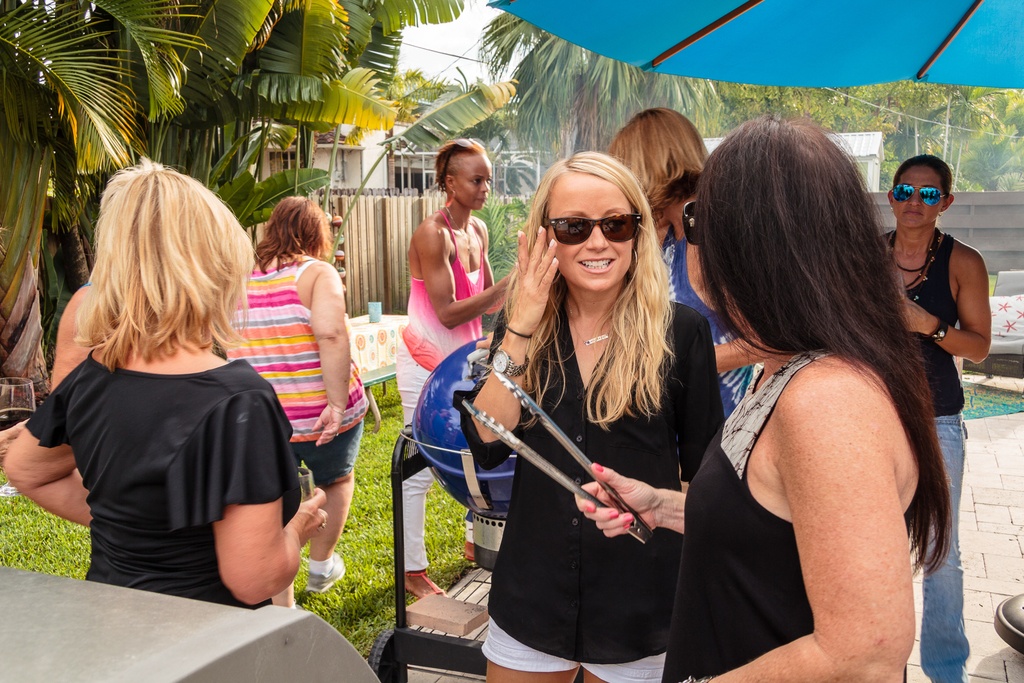 If you are a grillmaster, competition cook, backyard BBQ aficionado, or just simply love cooking outdoors, please email robyn@grillgirl.com and introduce yourself!

If you know of a Girl Who Grills, give them a shoutout in the comments!

Along with being the first guest in the Girl’s Who Grill Interview Series, we’re lucky enough that Jackie Milligan also shared one of her tasty recipes with us to pass on to you so you can try her delicious food at home!

The recipe is for Jackie Milligan’s Crown Apple Smoked Cheesecake and it’s a real treat. It’s the same smoked dessert recipe that led Jackie to her first victory in a cooking contest. Give it a try! 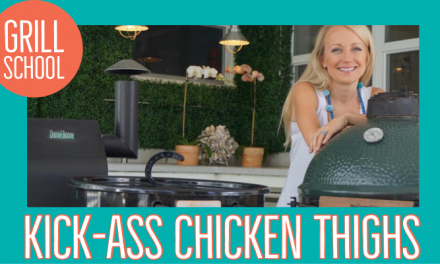 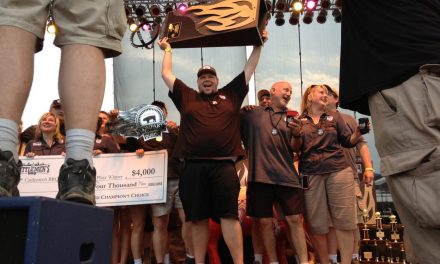 Congrats to Sweet Swine O Mine BBQ Team for Winning Grand Champion: Memphis In May 2013 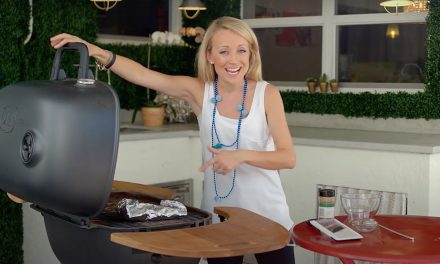 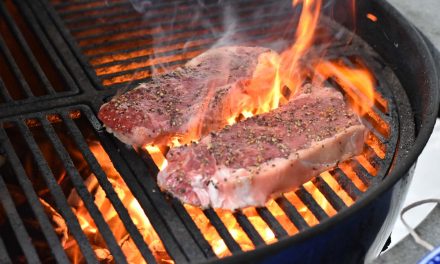