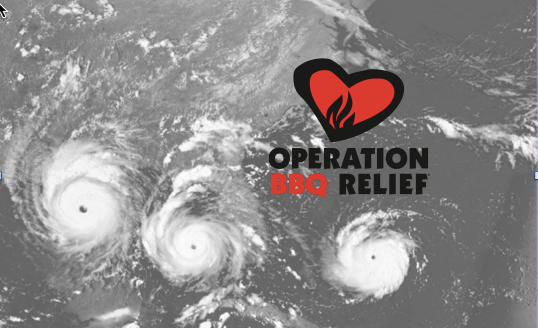 As 2016 Hurricane Season ramps up, Operation BBQ is looking for volunteers in the Gulf Coast Region….

NOAA will announce its 2016 hurricane outlook on May 27, but Operation BBQ Relief wants to get in front of the season by asking individuals and barbecue teams–especially in the Gulf Coast region–to consider signing up as official volunteers with OBR.

OBR is a disaster response team that organizes competition BBQ cooks and other volunteers to serve hot food and deliver comfort to those displaced by disasters.

When tragedy strikes and we determine there’s a need, our volunteers swing into action. Using our network, we organize local volunteers and our cooks to set up to deliver meals. We start smoking or grilling and distributing food to shelters, hospitals, disaster zones, emergency workers and wherever else our meals our needed.

“The Gulf Coast is a particular concern,” says our co-founder and CEO Stan Hays. “In the Monroe (Louisiana) flood, the local folks were quickly overwhelmed. After two days, the volunteers disappeared. The local sheriff provided us non-violent offenders from their work-release program to assist our efforts. They packed 5,000 meals in 1 ½ hours.”

“At the end of the day, we wouldn’t have been able to what we did without that work crew,” Stan says.

But prison work crews won’t always be available. It’s a vital part of OBR’s mission to have registered volunteers at the ready across the United States. Stan says that Florida and Louisiana are particularly in need of more volunteers who are willing to pitch in.

It’s critical for locals to get involved in the volunteer efforts of OBR. Often, when our team shows up to cook, they aren’t familiar with the local area. Having a few knowledgeable folks show up to guide us and tell us the best possible locations, options for obtaining supplies or just hooking us up with officials and can-do people becomes a significant part of our efforts and can make a huge difference in how fast and effectively we serve those we came to help.

The region from Louisiana to Florida covers approximately 1000 miles of coast line. Having registered volunteers from Lafayette to Tampa ready to go when hurricanes threaten or when skies start churning will ease OBR’s operation in those areas and speed comfort to those affected by tragedy.