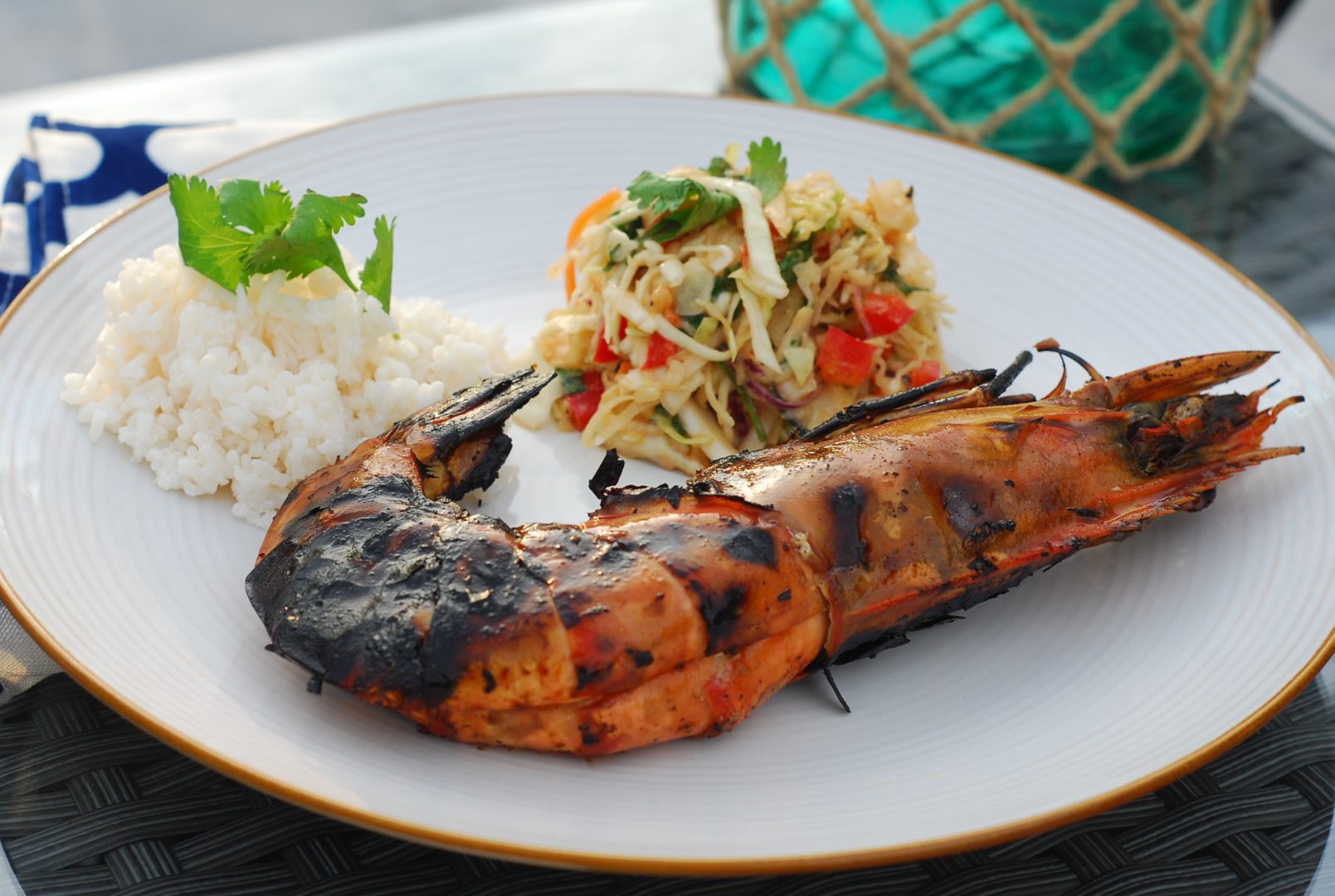 My seafood guy Peter Jarvis has been telling me about these massive wild caught ocean prawns they carry that are almost a foot long (they ship too- Francesca’s favorites) so I decided to give them a try to wow our dinner guest last weekend. When I opened the box to take a look at them, my jaw dropped- these were the biggest “shrimp” I have ever seen- about a foot long! So I came up with this recipe for Grilled Soy Ginger Prawns!

So what’s the difference between a prawn and a shrimp?

Prawns are usually larger and have longer legs with claws on 3 pair of legs, while shrimp are smaller and have claws on only 2 pairs of legs. The terminology prawn/shrimp is often used interchangeably across the globe though…)

If you ever had the opportunity to find these large, wild caught ocean prawns (wild caught = sustainable, not farm raised), then snatch them up because you are in for a real treat. You will have as much meat as if you are grilling lobster tails. For recipe sake, this marinade would work great on smaller shrimp or a lobster tail too.

In prepping for these, I was stumped on a flavor direction and my hubby Scott, always full of great ideas, said “let’s go Asian”. He was spot on- we did a ginger-soy marinade, paired with an Asian slaw and coconut rice that were “dinner party perfect”. I will definitely be making this again! The Prawns were “Oh MY God” amazing, but note that all of the dishes in this meal got thumbs up and made this go to my top 5 list of dishes to make when having people over.

The marinade recipe is originally from Bobby Flay made for Shrimp that I have adapted and applied to these prawns. 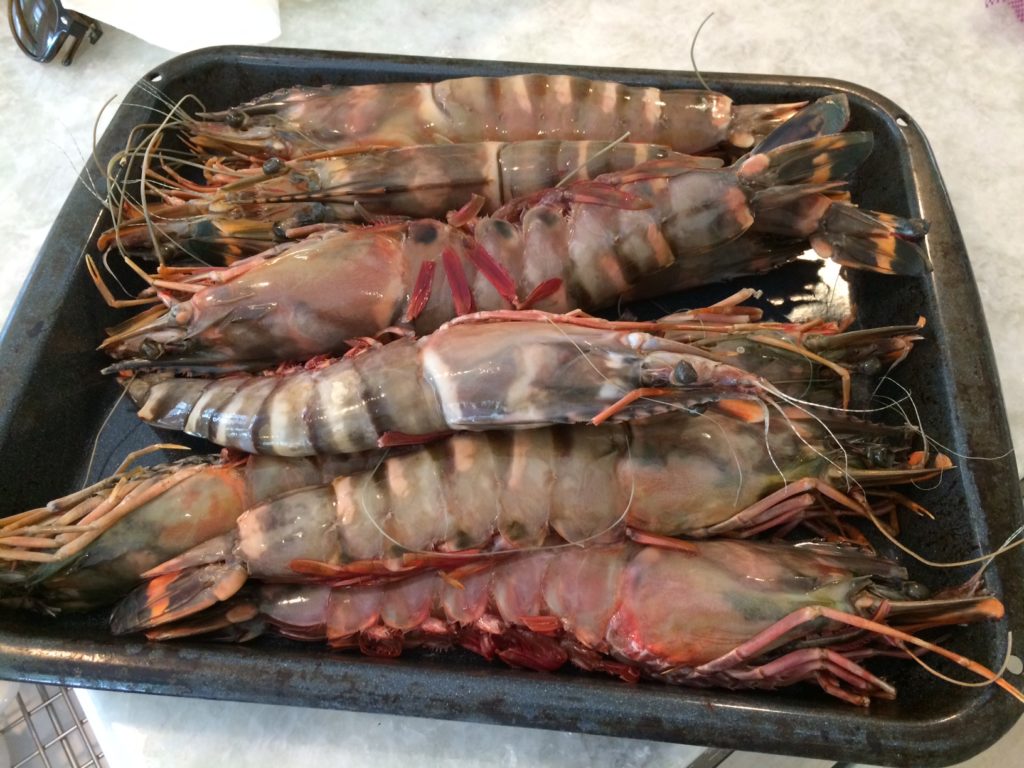 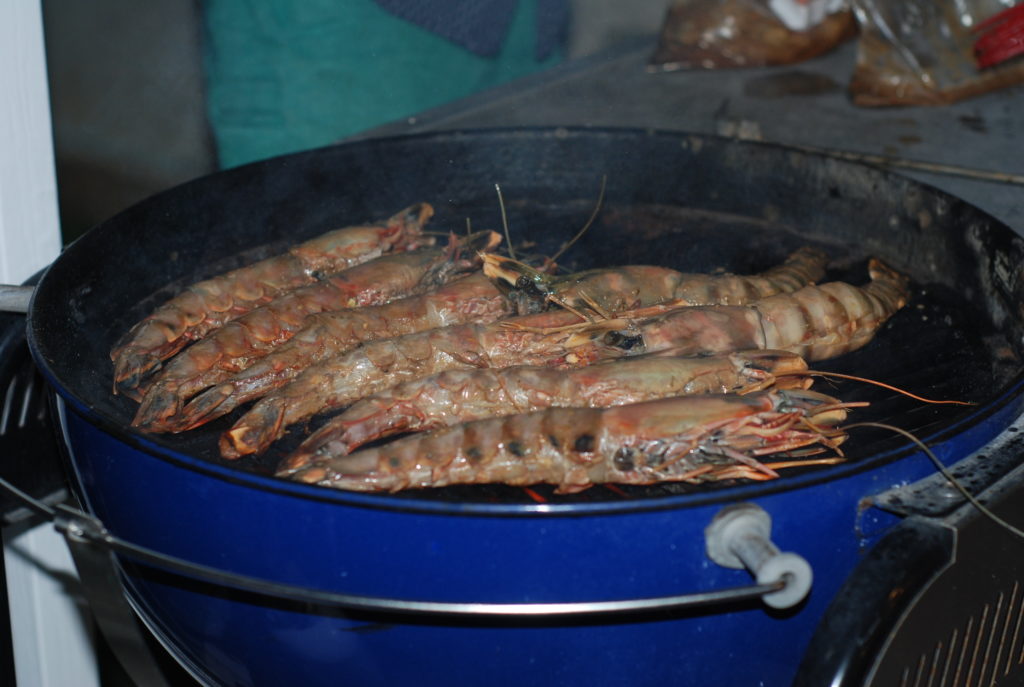 wow, they take up a good portion of the grill! 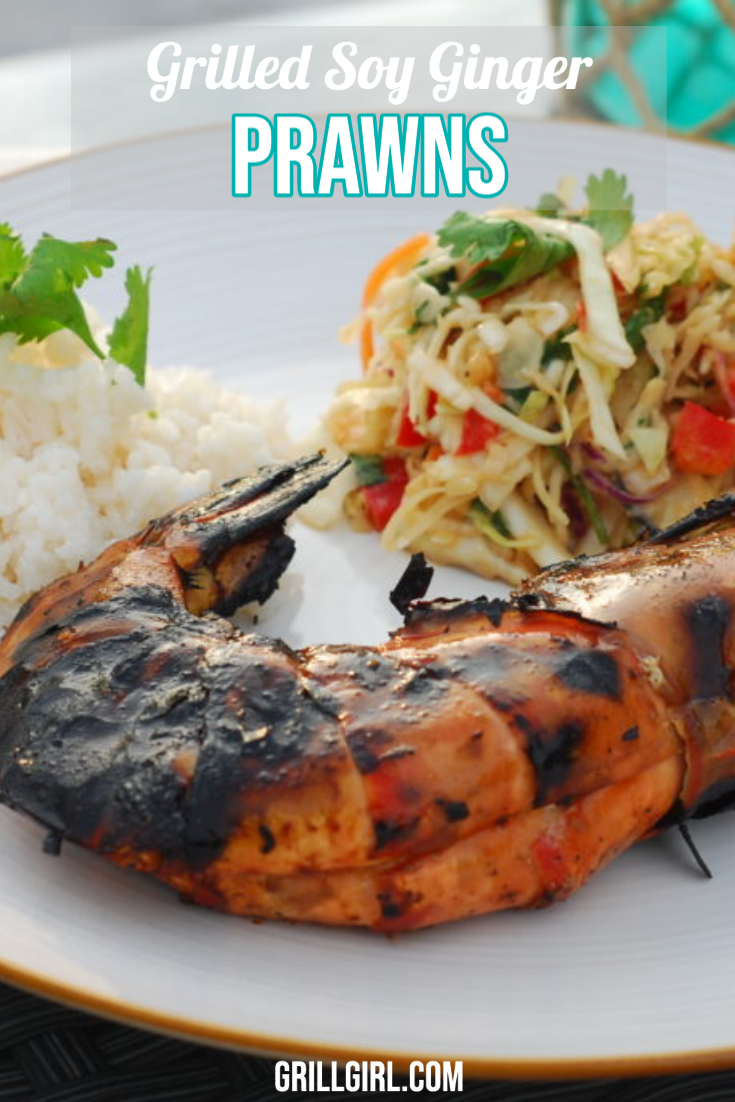 Combine the first 6 ingredients (shallots, ginger, soy, lime juice and sugar) in a blender and liquefy until all ingredients are mixed up. Next, add the oil and green onion and blend again until uniformly mixed. Add black pepper to your liking.

Next, devein and butterfly these large prawns so they will grill evenly being careful to remove the waste vein. (When purchasing shrimp, it’s a bonus if you can find them deveined already and there is no need to butterfly) You will grill these prawns much like lobster in that they will need to be butterflied on both sides to grill evenly.

Marinate the prawns or shrimp for 30 minutes at room temp.

Next, prepare your grill for medium high direct heat (about 350-375 degrees). Make sure to oil your grill grates so the prawns will not stick! Grill the prawns about 6-8 minutes per side or until they begin to form nice charm marks. Use your thermapen to ensure your prawns have reached an internal temp of 145 degrees and pull them off.

I paired these with Asian Slaw and Coconut Rice, both of which I made beforehand so I could spend more time with my dinner guests when they came over. Plus, slaw is always better when it has time to marinate.

Get out one medium bowl for mixing the liquids and one large serving bowl for the slaw. Combine the rice vinegar, sesame oil, peanut butter, soy sauce, brown sugar, ginger and garlic with a whisk until uniform in consistency.

In the larger bowl, combine the slaw mix, red bell pepper, green onions and cilantro. Toss the liquid ingredients into the cabbage mix and combine. Let marinate in the fridge at least an hour before serving.

I really really love anything with coconut in it and this rice is the bomb.com. You will look forward to the leftovers the next day!

Before embarking on making this rice dish, you will need to refrigerate the 2 cans of coconut milk in the fridge an hour before preparing. This is to make it easy to scoop the thick coconut “cream” off the top to use for this recipe. The remaining coconut milk/water can be used in other recipes.

Combine the rice, the 1.5 cups coconut cream, sugar, salt and water in a saucepan. Stir briefly to combine the sugar, rice and coconut cream. Bring to a boil, then cover and let simmer on low heat for 40 minutes or until the liquid is absorbed. Turn off the burner and fluff the rice with a fork, let it sit covered for another 20 minutes to continue to steam.

This rice will knock your socks off!

If you liked this recipe for Grilled Soy Ginger Prawns, check out these similar recipes!https://grillgirl.com/2017/12/rosemary-lemon-shrimp-skewers/