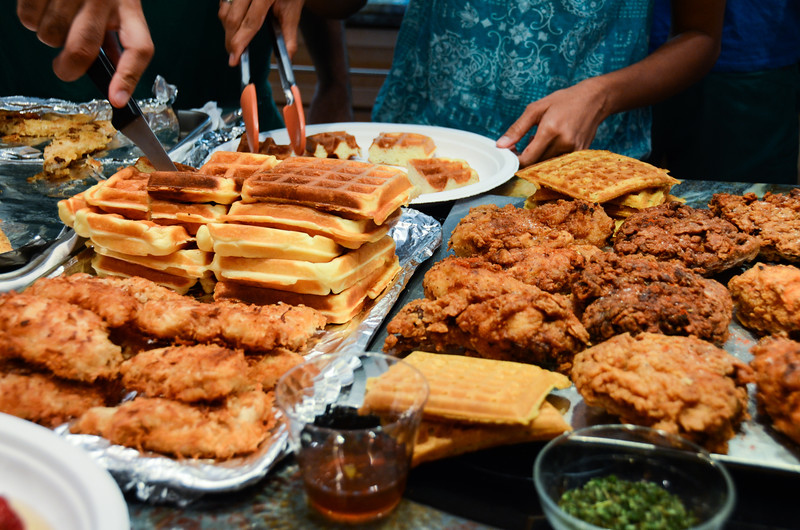 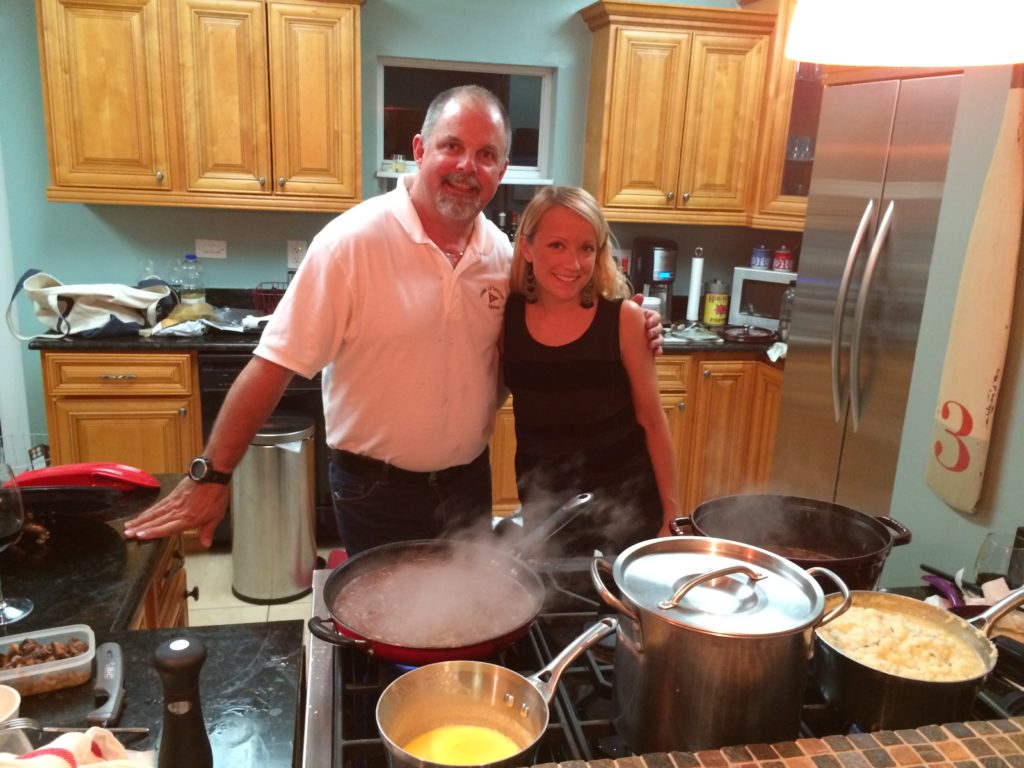 Ross and I competing next to each other for “Best Coq Au Vin” dish. Judging criteria was based taste, creativity and presentation.

I’ve been meaning to tell you about this idea for dinner parties for a while. But I’ve been a little distracted! ( you know, major house renovation, being pregnant, all that stuff…)

The idea came from my friend Astrid who was over at our house one night and made the comment that I had not used the Staub Cookware they had gotten us for our wedding (which had been almost 4 years prior). I replied “of course I have” but this was a little white lie (she could tell it was not seasoned). You guys know that I grill everything so this beautiful French Cast Iron cookware was more of a trophy piece sitting in my cabinet. 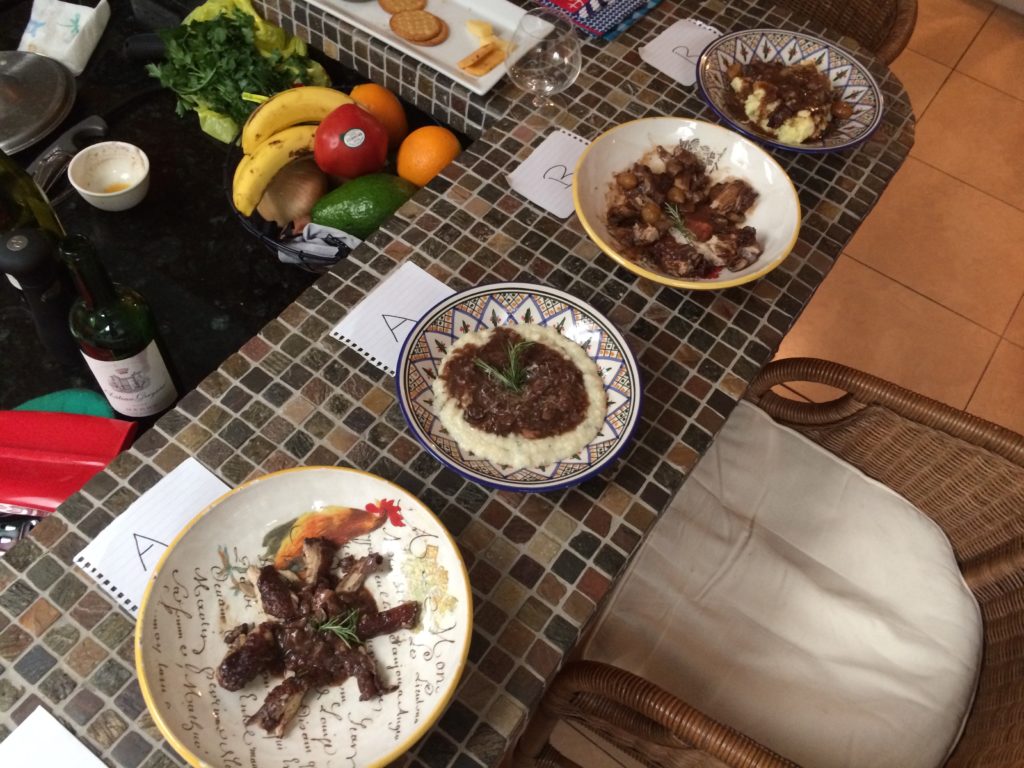 Here’s the Line Up of our Coq Au Vine entries for the judges to try.

Then I saw Astrid at a regatta party and over a few cocktails, she officially challenged me to a Coq Au Vin cooking dual against her husband. Never one to turn down a good challenge, I said sure what the heck. And this is how dinner parties have been officially changed forever for our circle of friends.

The traditional dinner party involves one host doing all the heavy lifting and others show up and enjoy themselves. This new concept, what I’ll call the “cooking competition dinner party” gets the whole party involved, which also lessens the burden on one person.

The first official “cooking competition”, Ross and I decided to compete on a classic French Recipe- Coq Au Vin. The other attendees were the judges. My husband, the product marketing manager, quickly whipped up score cards that night and the group decided we would be judged based on taste, presentation and creativity. We strategized leading up to the event- bring your own ingredients, etc, how to share the kitchen, etc.

Ross (Astrid’s husband) showed up with his own well seasoned Staub Casserole and his ingredients and we commenced to cook, side by side, while the other guests cheered us on. Ross used Julia Child’s classic French Recipe and I took a recipe I found online and made it my own, a more simplistic modern version of Julia’s classic dish.

Now, Coq Au Vin is not a “quick” dish. It is a series of steps. Braising, Roasting, sauces, etc. There was a lot of wine consumed from when we started to when the final dishes were presented…. In fact, I don’t think our final guest left until 2am- full, a little drunk and quite happy.

The net net was that everyone had a great time and we all ate really well and it was a collective effort. Everyone in attendance said “that was the most fun I’ve had in a LONG time”. Oh, and I won! Can you believe I won cooking a classic French Dish (FYI I never cook French food but I did do some practicing for this!).

Every couple is working on their chicken and waffle entry. 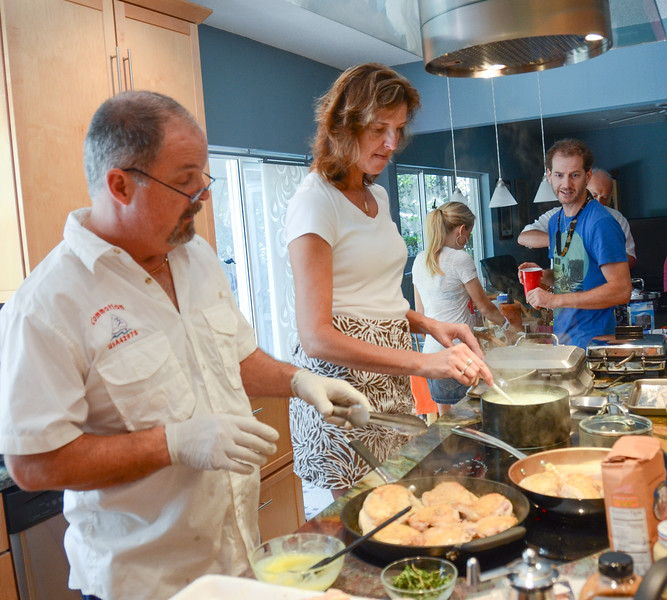 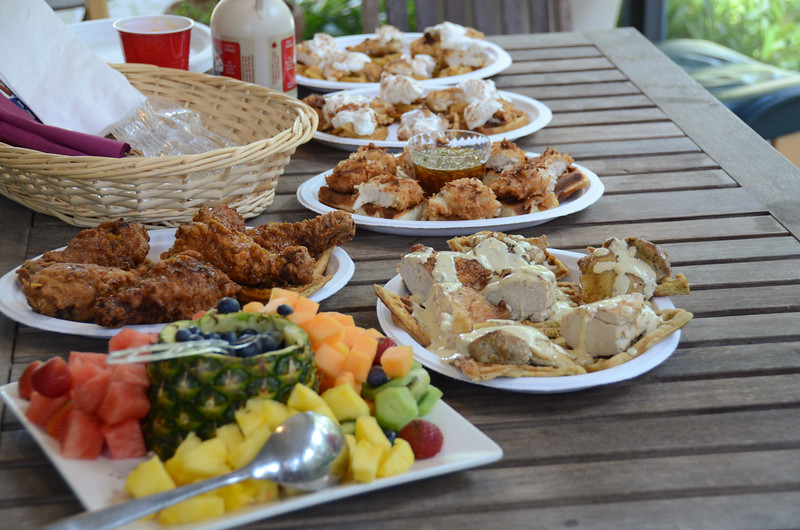 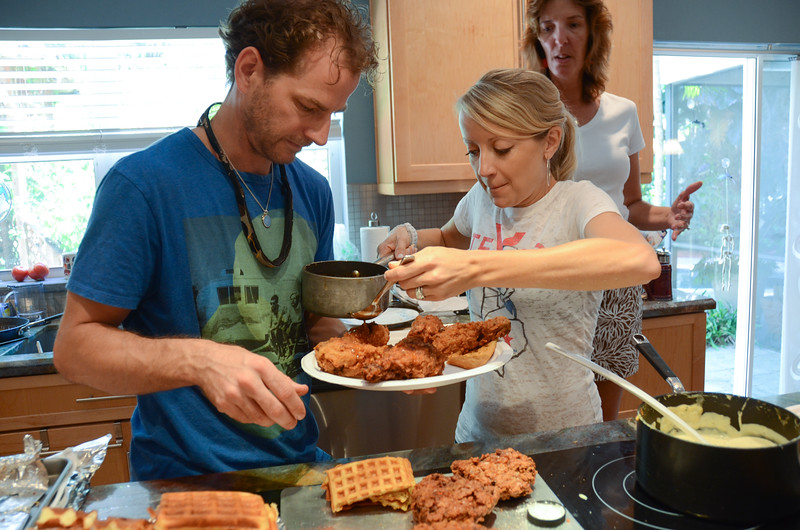 Working on plating my chicken and waffles… 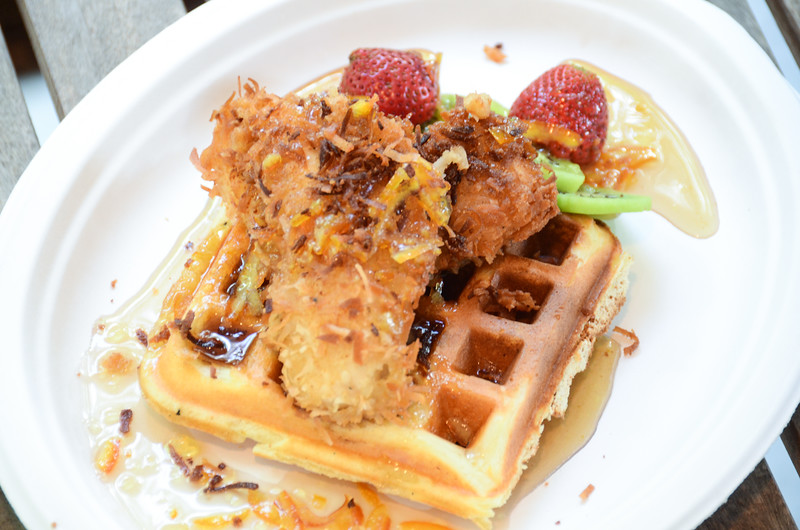 You know you want a bite of these coconut encrusted fried chicken and waffles finished with an orange mango syrup.

As a general guideline, from the group you decide on the next cooking theme and then someone offers to have it at their house. The follow up to this was “The Great Chicken and Waffle Cookoff”. Each couple brought their own waffle maker and batter and we went to town frying up chicken (I friend mine beforehand and brought it to the party. As I had no kitchen, I did it all on the side burner on my grill- quite impressive). In this instance

This was not a day I ate Paleo lol. We did this party as “brunch” as we saw this as fitting for chicken and waffles.

We had 5 couples enter their chicken and waffle recipe and they were all so unique and creative that we decided we were all winners and left it at that. I did a class double buttermilk fried chicken with orange thyme waffles with a bourbon maple syrup. Our friends Kristal and Adeel embraced her Island Heritage (she is from Trinidad) and did a coconut encrusted chicken with an orange mango syrup for the waffles. And of course Ross and Astrid did a recipe from Bon Appetit that involved a rich tarragon cream sauce for the chicken that was out of this world. As this was this past fall, there was also a yummy pumpkin waffle fried chicken combo. 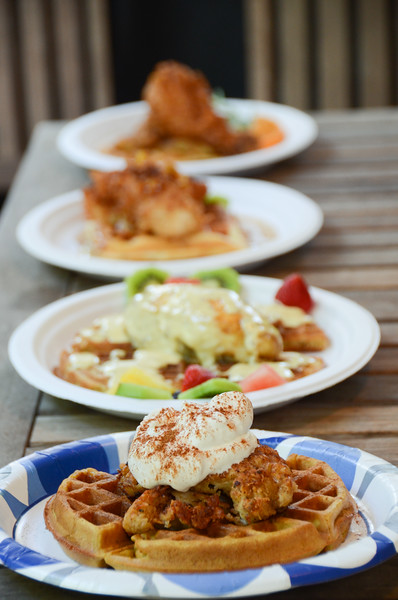 Chicken and Waffles in 4 mouth watering versions. Each entry was unique and tasty in its own way so we decided to declare each one a winner as they were all so different amazingly good.

So there you have it, a new, interactive way to do dinner parties. I promise once you try it this way you won’t go back to the way you were hosting them before. This was is SOOO much fun and it gets the whole group involved. Plus, it takes all the work away from just one person.

Now that our house renovation is almost done, I am hopeful there will be many more in our future. Of course, there will be an addition to the next one as I am currently 7 months pregnant. I hope one day little Hunter will be able to be my little helper in the kitchen as we continue the cooking competition tradition! I aspire to see him on Master Chef Junior one day. Okay, maybe I’m getting a little ahead of myself here. 🙂