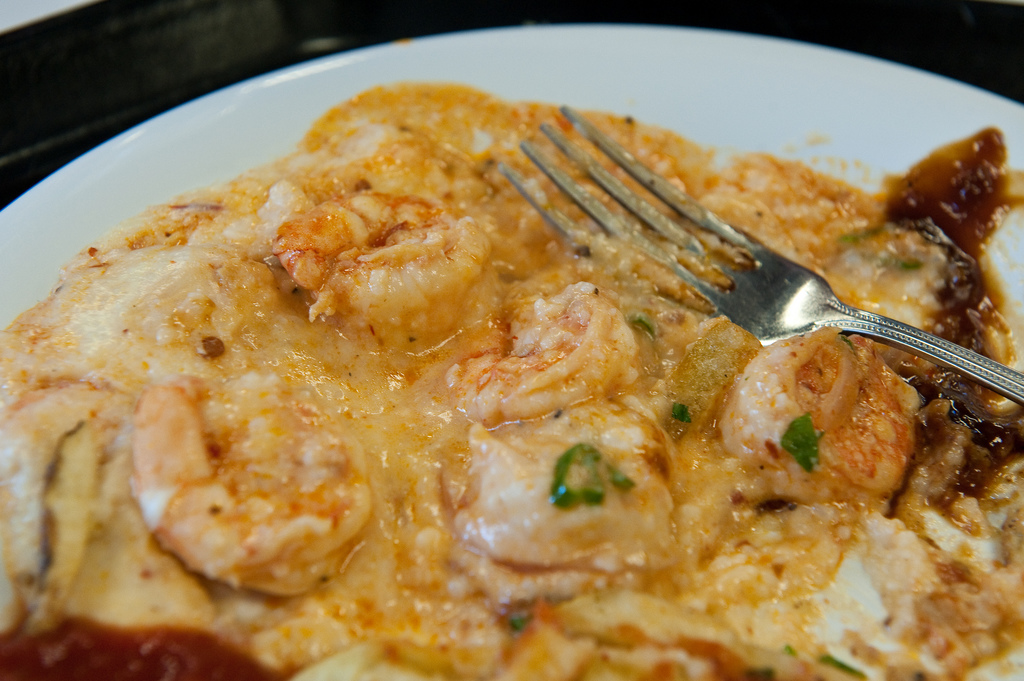 I was invited to a Holiday brunch potluck with some of my Crossfit friends and the theme was to bring a dish representing your culture. There was a great mix of interesting dishes representing the diversity of South Florida- Puerto Rican rice and beans (Arroz con Gandules), salted codfish and fritters from Guyana (this dish is also popular in Jamaica), Soul Food like collard greens and sweet potato pie, and I brought Shrimp and Grits.

Hailing from the South, I couldn’t think of a dish that was more quintessentially Southern (and the acronym for grits is “Girl Raised in the South”). 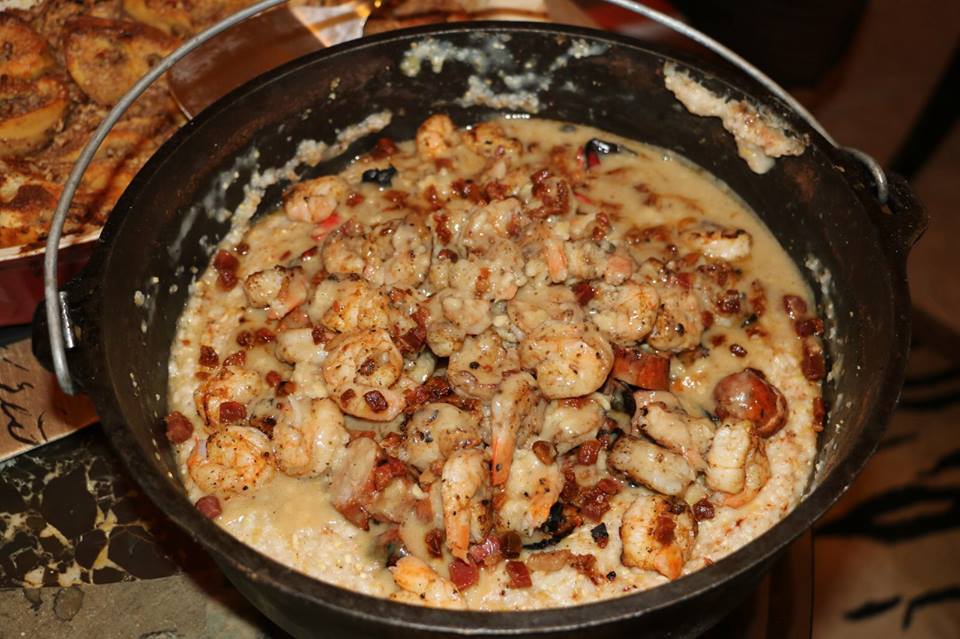 Here’s the big pot of Shrimp and Grits I brought to the pot luck I cooked and then carried it over in a big dutch oven.

Shrimp and grits is not normally a dish that is made on the grill, but it should be! Normally the shrimp, peppers and sausage are sautéed in a pan. But grilling the shrimp, Andouille sausage and peppers adds a nice touch of smoke and char to this recipe, which adds depth of flavor that you can’t get from a stove top!

ingredients for Shrimp and Grits

Cooking the grits in the dutch oven…

Grilling the peppers while cooking the pancetta… 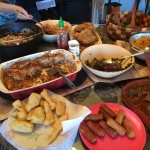 I also added crispy pancetta, the drippings from it made a wonderfully rich gravy to finish this dish. It’s an extra step but it is OH SO WORTH IT. Of course this part, and the cooking of the grits, do not need to be done on the grill, but as I have no kitchen right now, I did the entire dish, A-Z, on my grill. I actually made gravy on the grill in a cast iron skillet- this was a first for me and something I’m very proud of. Gravy is no small feat on a charcoal grill!

Here is the Shrimp and Grits recipe of all recipes that will make even the grits haters into lovers of this dish. NOTE: I used special grits I discovered while traveling on a business trip in Texas. War Eagle Mill makes organic, course ground grits that are THE BEST GRITS I have ever had. They are ground in the only working Mill in Arkansas, fed by an 18 foot cypress waterwheel. If you like Grits, then these will knock your socks off!!

Preheat your grill to 350 degrees and prepare for direct heat. Meanwhile, toss the shrimp in olive oil and Old Bay Seasoning. Thread the shrimp on the skewers. Next, grill the shrimp for 2 minutes per side or until pink and remove from the grill- DO NOT Overcook. Add the sausage and peppers and grill until the sausage has reached an internal temp of 140 degrees (I recommend the thermapen instant read thermometer for checking internal temps quickly) and the peppers have achieved nice char marks on both sides. Remove the sausage and peppers and let cool. Remove the shrimp from the skewers and then chop the peppers and sausage.

While the grits are cooking, heat pancetta in a cast iron skillet or sauté pan. Cook until crispy and remove the pancetta. Now, bring the pan to medium heat and add the 14.5 oz can of chicken broth. Gradually add the flour, a tablespoon at a time, and stir with a whisk to get remove the lumps. Stir constantly while adding the flour. Let the gravy reduce down and stir constantly to remove any lumps.

To serve, place a heaping ladle-full of grits in a bowl, add shrimp, sausage, peppers and bits of pancetta. Finish with a generous serving of gravy! ENJOY!! Goes great with a spicy Bloody Mary for a proper Southern Brunch. And, don’t forget the Hot Sauce!!! My favorite with Shrimp and Grits is Texas Pete.