Salt 101: A Primer on Different Types of Salt To Up Your Culinary Game 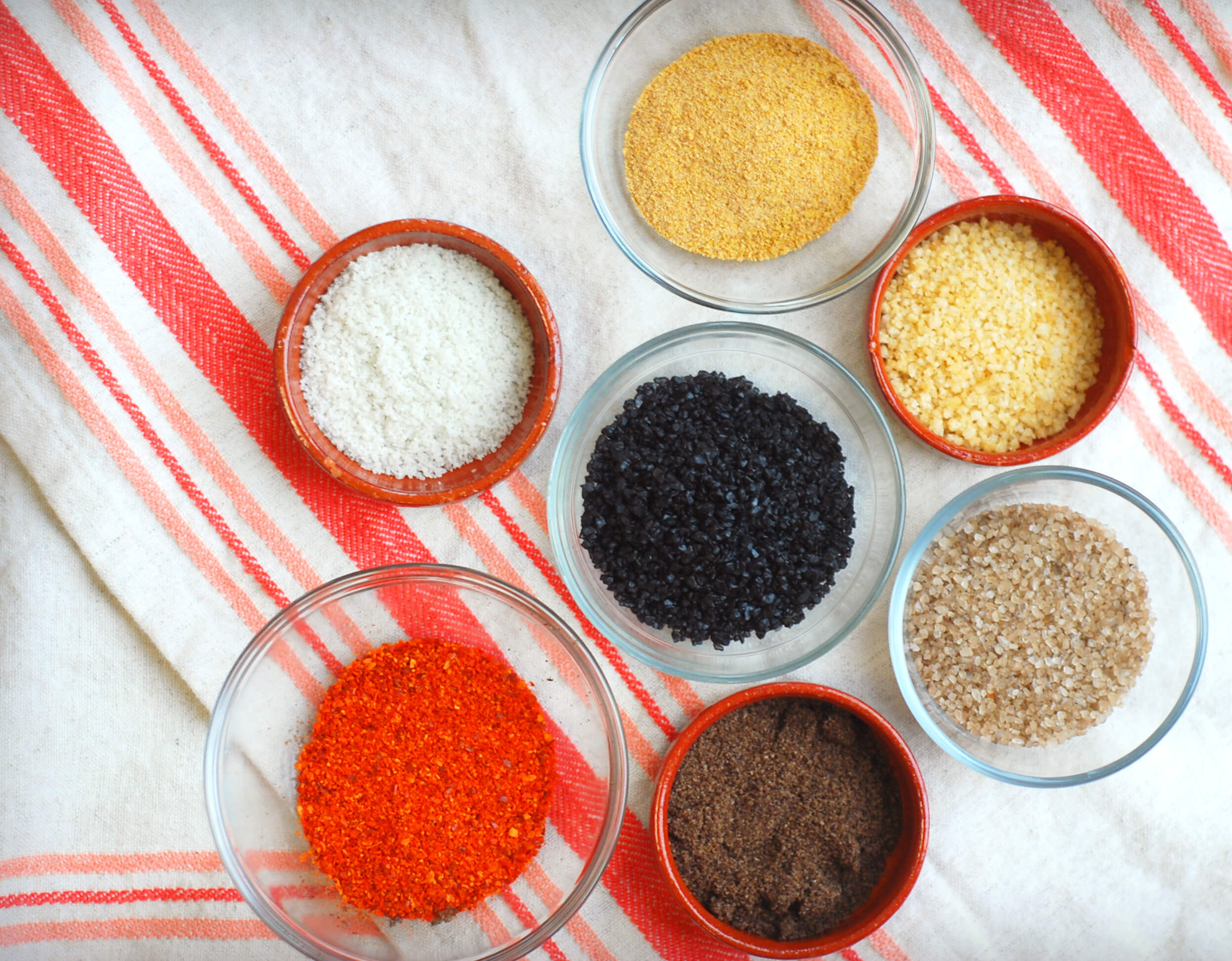 I’ve recently become obsessed with salt. You see, not all salt is created equal and it’s important to note that your average table salt is quite different than a “sea salt” for example, and the nutritional benefits can vary by type. Let’s take a closer look at this staple ingredient- you’ll see that a little “salt knowledge” will open up your culinary world!

**Many thanks to my friend Paul Ryzda, owner of the Spice Quarter, who gave me a great primer on all things Salt.

Salt has a seasoned history- it was used as currency in Ancient Rome, which is how the word “salary”, with the Latin root “sal” came to be.

Look at the label of your favorite bbq rub and no doubt salt will be a key ingredient. Have you ever wondered why you should use kosher or sea salt in your rub recipe versus average table salt? Salt types can make a huge difference in your recipes –up your culinary game by knowing the difference between kosher, flake, sea salt or even the smoked and flavored sea salts available today. You can even make your own flavored “finishing salts”, which are a great finisher for anything you pull off the grill, and could be the secret weapon in your next cooking competition. 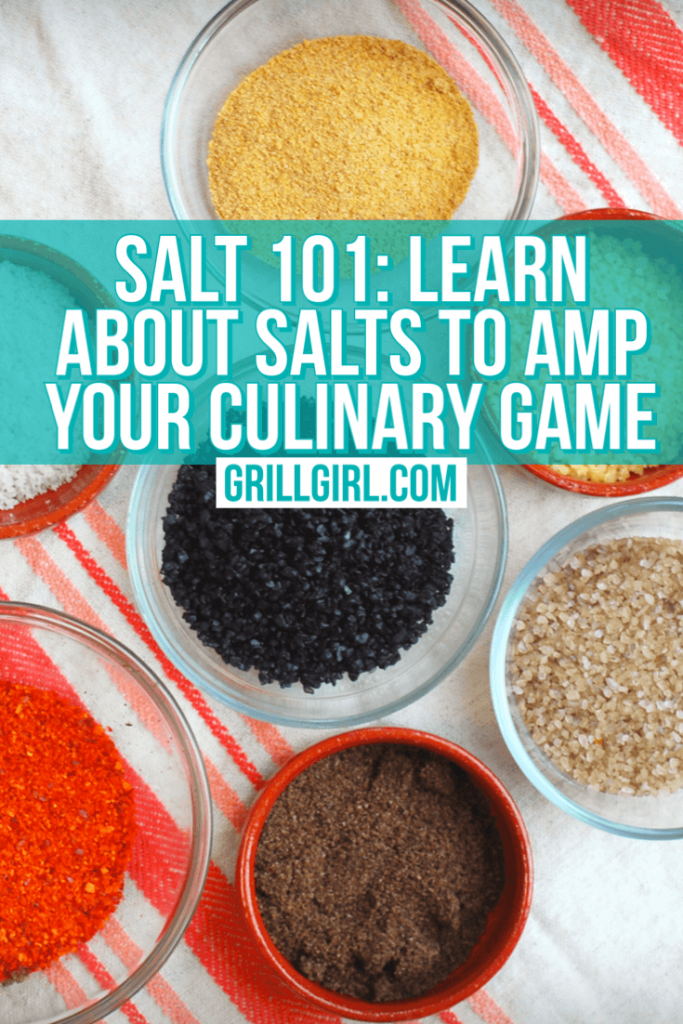 Where does salt come from? All salt has origination in the sea, whether it is from a dead sea or a living one. It is a mineral composed primarily of sodium chloride.

Table Salt: This is what is found in most kitchens, it usually comes from salt mines and is refined to be almost pure sodium chloride, which also removes all trace minerals. Table salt is available in plain or iodized form, which is done by spraying the salt with iodine. People often tend to over season using this salt due to its fine crystal size and high sodium chloride content versus using salts with larger crystal sizes.

Kosher Salt: Kosher is in a flake like shape that dissolves easily and has a lower sodium chloride percentage than table salt. The word kosher does not necessarily mean it is inspected by a Rabbi, but because it is often used for the preparation of meats according to Jewish dietary guidelines. Its larger flake size and lower sodium chloride percentage make it an excellent choice for cooking and for use in rubs.

Sea Salts: Sea salts are derived from the sea and are usually much less refined than other kinds of salt, which leaves them with a higher trace mineral content which gives more flavor. According to Paul Ryzda of the Spice Quarter, “They vary widely in color based upon the minerals, algae and earth surrounding the salt fields. For example, Hawaiian Alae is red because of the clay beds, Hawaiian Lava is black because of the presence of charcoal, Fleur De Sel is grey because of Trace minerals, and Australian Murray River is pink because of the algae in the riverbeds.”

Popular forms of Sea Salt include:
• Sel Gris– French Grey sea salt derived from the Atlantic. They are usually lower in Sodium chloride and therefore a great finisher for grilled meats and veggies.

• Fleur De Sel– this is the “caviar of sea salts”, its literal translation is “flower of the salts” and is made up of the young crystals scraped off the top of the French evaporation ponds in the Guérande region of France. It is from the same ponds used for Sel Gris, except extracted from the top before sinking to the bottom. Its delicate flavor make it a great finishing salt.

• Hawaiian Sea Salt– this is often red/pink due to the naturally occurring “Alae” from the nearby Hawaiian clay that is added to enrich the salt with iron oxide, that makes it more earthy and mellow than traditional sea salt . Black Hawaiian sea salt contains charcoal which adds a nice flavor, crunch and a color-pop on dishes.

• Himalayan Sea Salt– this is the purest, most mineral rich forms of sea salt available- it is derived from ancient mines in Pakistan and is often used for gourmet cooking, as well as in spa treatments. Himalayan salt slabs are often used for cooking and imparts a delicate, salty finish to foods cooked on it. It is usually light to dark pink in color.

Seasoned Salts: these are often a blend of spices, but the main ingredient is salt and therefore called a salt. These usually contain salt, black pepper, sugar, paprika, onion and garlic.

Smoked Salts: Crystal salt is smoked over hickory, alderwood or applewood to add a nice smokiness to any food or rub you blend it with. The smoke intensity will be based on the duration of the smoking time.

Curing Salts: These are also referred to as “Prague Powder”, and contain sodium Nitrite which is essential for killing bacteria or fungus. According to Ryzda “the nitrite is essential to kill botulism deep in the meat in the slow-dry curing process of meats for charcuterie (think prosciutto), but in wet-brine curing it helps maintain flavor, color and texture for meats because without it your spiral ham would be grey instead of pink before it is cooked”.

Flavored Salts: Flavored salts are all the rage these days. Go to your local gourmet store, or even some supermarket, and you’ll see chile-lime, bacon salt, thai ginger salt- you name it someone has thought of it. See my recipe below to make your own citrus finishing salt. The sky is the limit with flavored salts, just combine your favorite herbs or spices to create your own unique blend. Makes for great gifts too!

How do you cook with different types of salt? Do you have a favorite? I’ve really been enjoying Sel Gris as my “go to” salt to keep on the table, and have been keeping it in this really cute starfish salt cellar I found in a cute boutique, (the one featured in this pic is exactly the same.) I’ve also been experimenting with finishing salts, to compliment different dishes. My Citrus Finishing Salt recipe is a great compliment to chicken, grilled veggies, just about anything!

Note: Affiliate links have been used in this article. If you happen to purchase anything this site will make a small commission that helps us keep bringing great content to you!