Authentic Cuban Sammies you can make on your grill 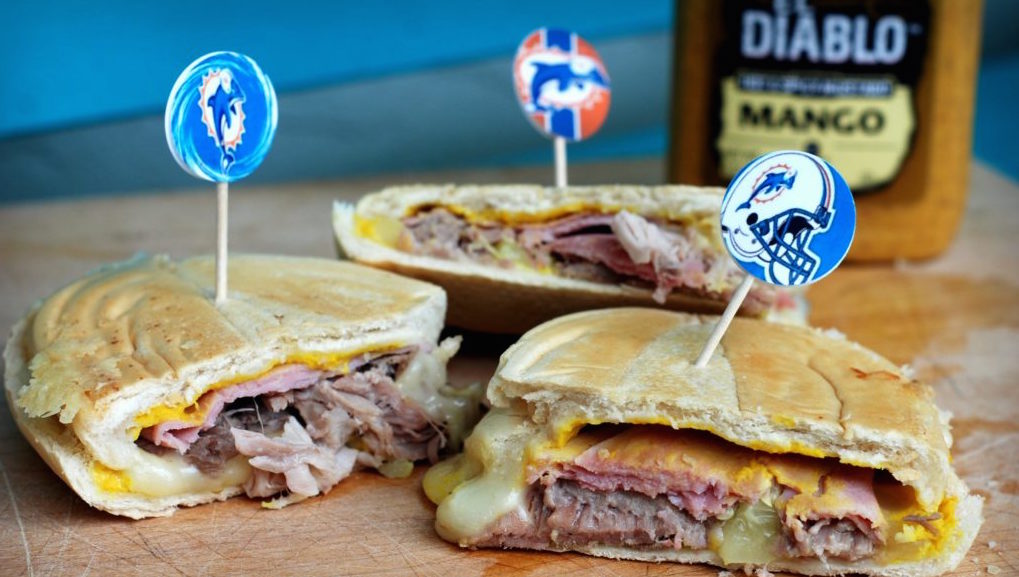 Living in South Florida, The Cuban Sandwich is just a part of everyday life.

You can pick up a Cuban pretty much anywhere you go. However, not all Cubans are created equal. There are important elements to forming the Quintessential Cuban Sammy.

I am not Cuban but have learned a lot from my Cuban co-workers over the years and thought I would give it the old College try on the grill.

The traditional Cuban Sandwich is made on a Sandwich or Panini Press and I simulated this experience with a brick on the grill. This is a great sandwich to make to feed a crowd at a tailgate because a true Cuban Sandwich, stuffed with roasted pork and ham and smothered in melted swiss cheese, is quite filling. 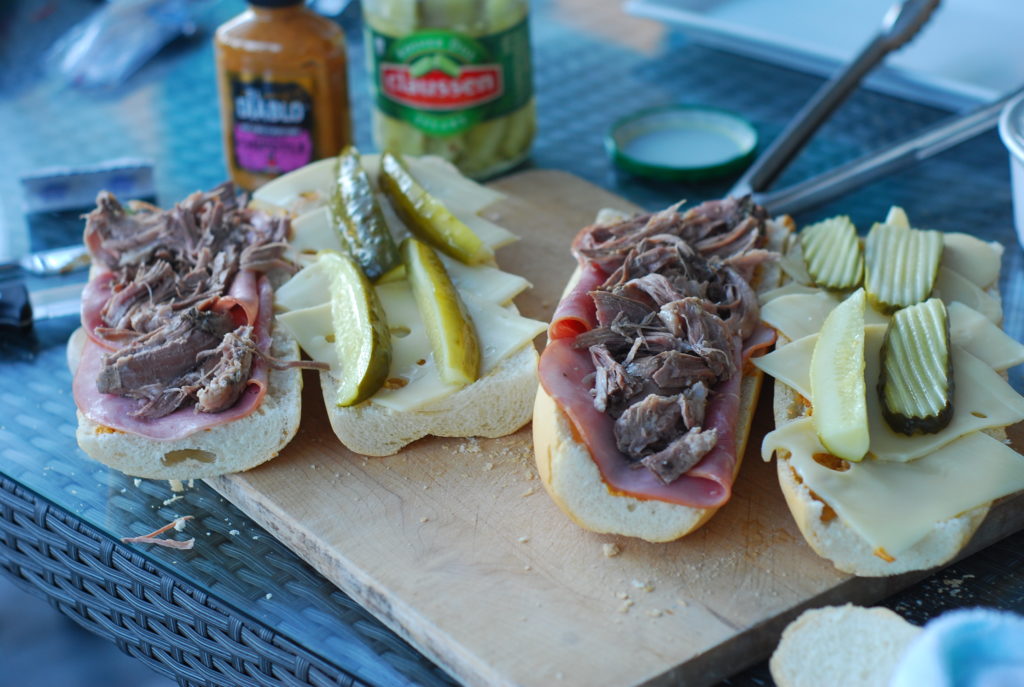 The assembly: generous slather of mustard, then cheese on both side, then ham, roast pork, pickles…(note I ran out of sandwich pickles and had to use spears)

Research says that The Cuban Sandwich originated in Tampa from the Cuban workers in the Cigar factories in Ybor City…..but let’s just agree that wherever they hail from (Tampa, Key West or Miami…) they are a culinary gift from the Cubans.

If you ever get a chance to get a Media Noche Sandwich (midnight), definitely give that a try. A Media Noche is a Cuban sandwich on the MediaNoche bread which is a fluffy egg bread- similar to Challah. It is the best. 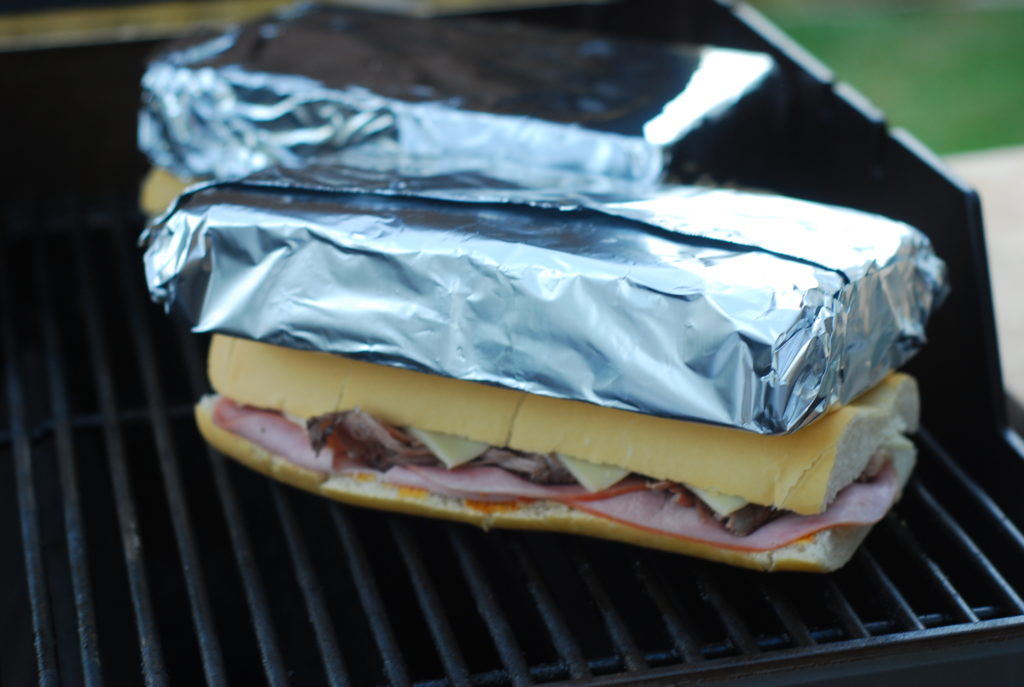 The brick acts as a panini press on the grill. You can also use a cast iron skillet if you don’t have a brick.

Finishing off this sandwich are 2 mandatory ingredients for any Cuban sandwich- mustard and pickles. El Diablo Mango mustard to spice things up a bit- I thought the Mango flavor would compliment my tropically inspired sandwich. It adds just a hint of sweetness and a ton of flavor, with a bit of kick. 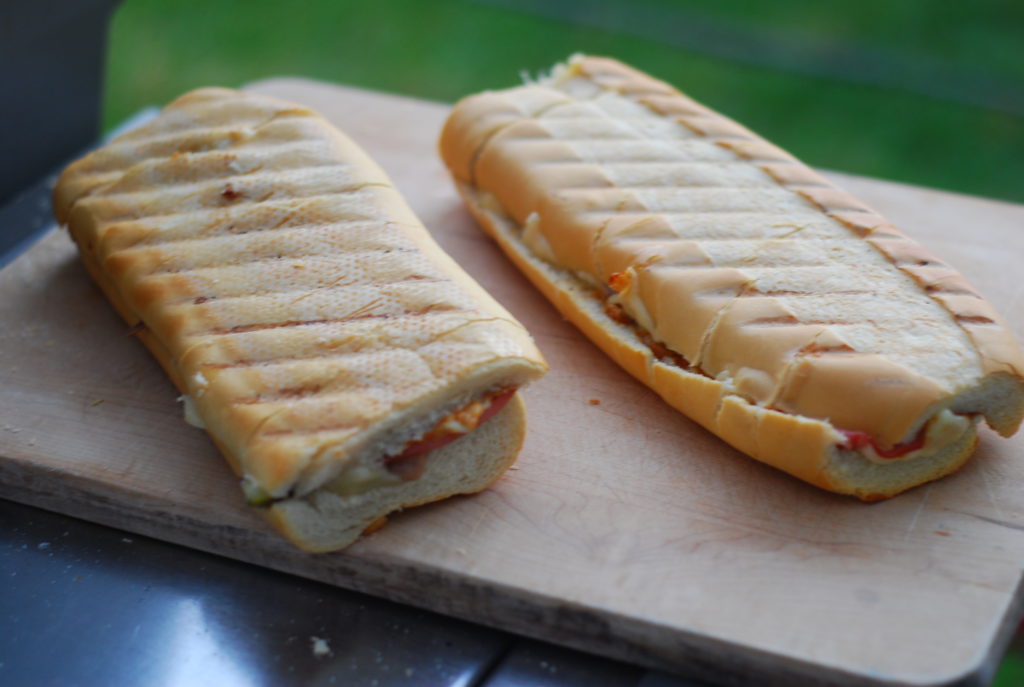 Hot off the (Grill) Press!! 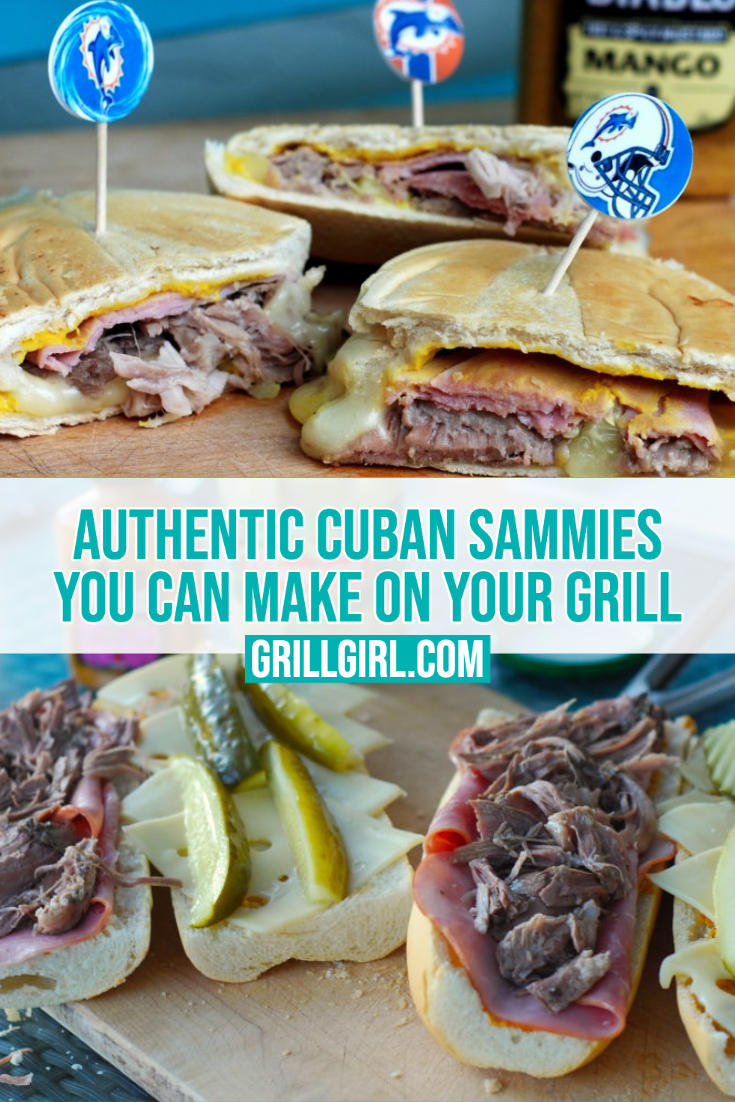 • 1 loaf of Cuban Bread – go to your Latin market if you can’t find at your grocery store. The bread is important to a true Cuban.
• 2-3 cups roasted pork (to be really authentic, marinate the pork in Mojo first: FYI, I do not currently have an oven and didn’t have time to smoke a pork butt so I roasted a pork butt in the crock pot for 6 hours in mojo marinade and sliced oranges and lemons. It turned out great for this purpose).
• Ham (I used applegate farms nitrate free ham- any boiled or glazed ham should work okay).
• Dill pickles, thinkly sliced
• 2 package sliced swiss cheese- enough slices to generously fill an entire loaf
• Mustard- I used El Diablo Mango Mustard to add a little kick

Traditional Cubans are sliced diagonally into triangles. For serving a crowd or a tailgating party, slice into mini servings so people can grab and go. I finished these off with these cute Miami Dolphins toothpicks that I found on Etsy, which are perfect for a tailgating party. 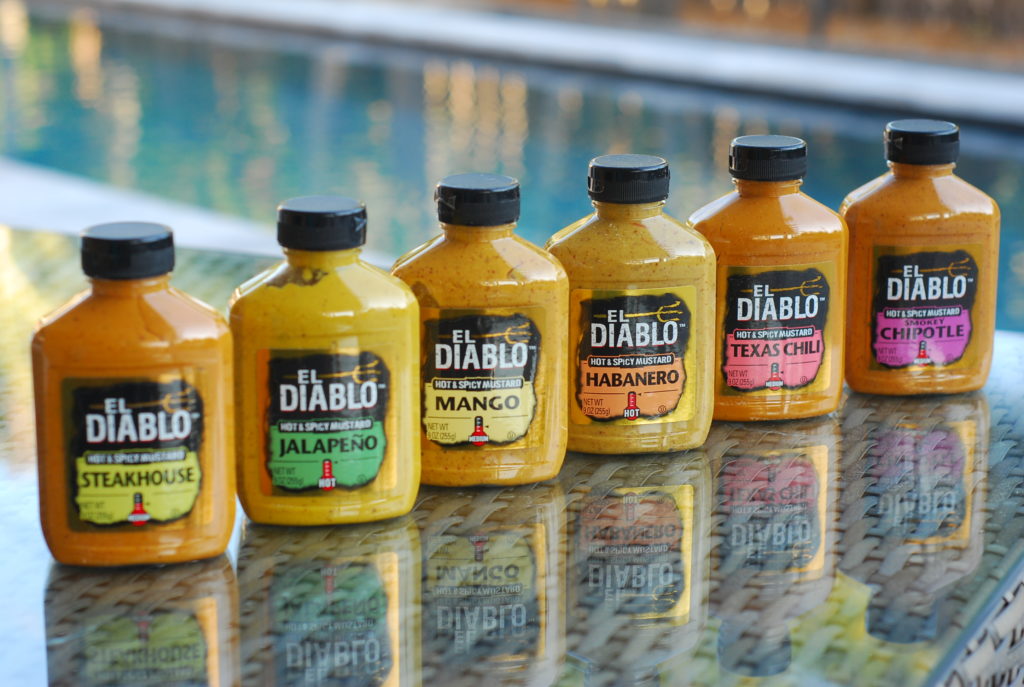 The El Diablo Mustard line up!

*note, this is a sponsored post by El Diablo mustard, but the thoughts and recipe are my own. Sponsored posts help keep this blog going!

If you liked the Authentic Cuban Sammies you can make on your grill, check out these related posts!

Kicking off the Tailgating 2.0 Series with Bristol Bash ’em Up Paninis