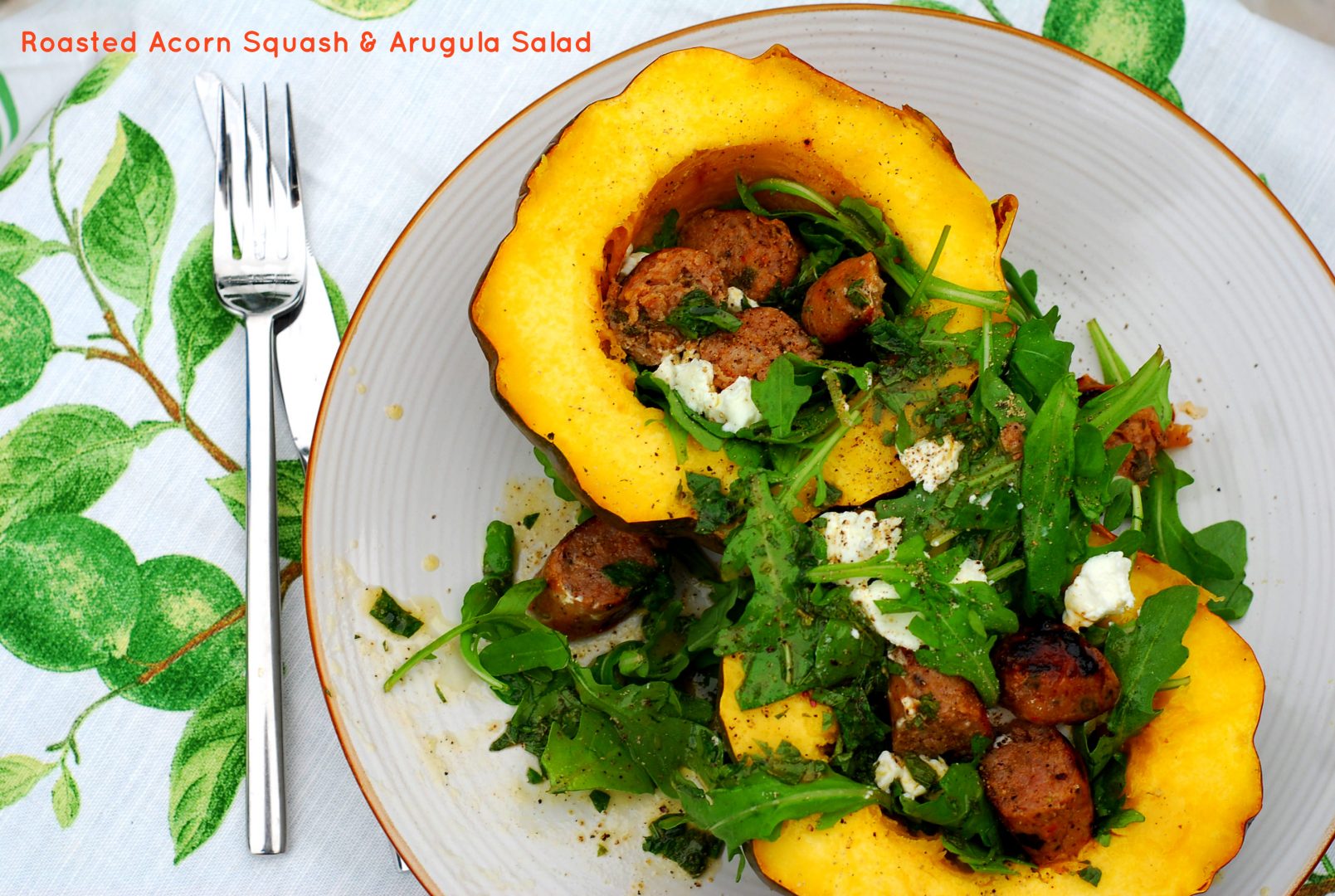 Ever feel like you are in a Culinary Cooking rut? Like when you have stacks of recipes piled up you want to try, but when it comes time to get dinner on the table, you retreat to the same old, same old?

It was for this very reason that I decided to start a “Cookbook Club” with some of my foodie friends.

The goal of the Cookbook club is to encourage ourselves to try new things and push the creative envelope as it relates to food. The first ever Cookbook club meeting entailed every person making a dish from one of their favorite cookbooks, and bringing the dish, along with the cookbook, to share and discuss with other members. It is like a Book Club /potluck foodie hybrid, with wine of course. 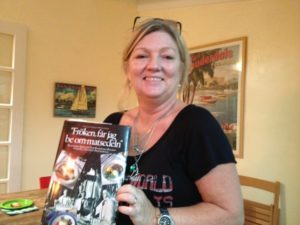 Millis shows off her Swedish Cookbook that she brought to the first Cookbook Club meeting.

The first Cookbook club meeting was a great success because everyone was really excited to share a favorite book/recipe with the others. For example, my friend Millis, who is from Sweden, made Swedish pancakes filled with pancetta, that was from a cookbook the government of Sweden gives to all of it’s inhabitants celebrating the restaurants and food culture of Sweden! How cool is that?

One of the reasons I was so excited was that this event forced me to actively try new recipes out of cookbooks I’ve been bookmarking for years. A cookbook that’s been inspiring and piquing my interest for a while is Seven Fires: Grilling the Argentine Way

by live fire cook extraordinaire Francis Mallmann. This book is especially dear to me as my good friend John from Patio Daddio BBQ gifted it to me as a wedding present almost 3 years ago. (Scott and I went to Argentina for our honeymoon and “7 Fires” highlights cooking techniques found in Patagonian Argentina.)

Francis Mallmann’s live fire cooking involves cooking over a large wood burning fire on a Chapa, which is like a big metal or cast iron skillet

that is heated from from the fire. He also teaches how to cook whole animals on a spit the way they’ve done this for centuries in Argentina, as well as roasting in earthen pits with rocks/leaves for hours that can be simulated in your backyard with a wheelbarrow (I’ve been wanting to try this for a while, maybe over Christmas!!). 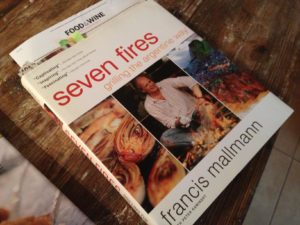 He highlights a cooking method called Rescoldo, which means roasting vegetables in the hot embers/coals of a fire, which will cook much the same way you might in a hot oven.

Mallmen’s has a recipe for Pumpkins cooked Rescoldo style, ie; in the hot embers. I’ve altered this recipe to use Acorn squash as they are slightly smaller and easier to find. I did this recipe in the oven because I don’t have a grill large enough to roast a large squash or pumpkin in the embers, but this is something I will figure out to do sooner than later!!

This recipe embraces the flavors of fall and the squash halve serves as the salad bowl making for great presentation. Simply add the arugula, goat cheese and sausage on the top for a hearty meal that is as pretty on the plate as it is appealing to your taste buds! 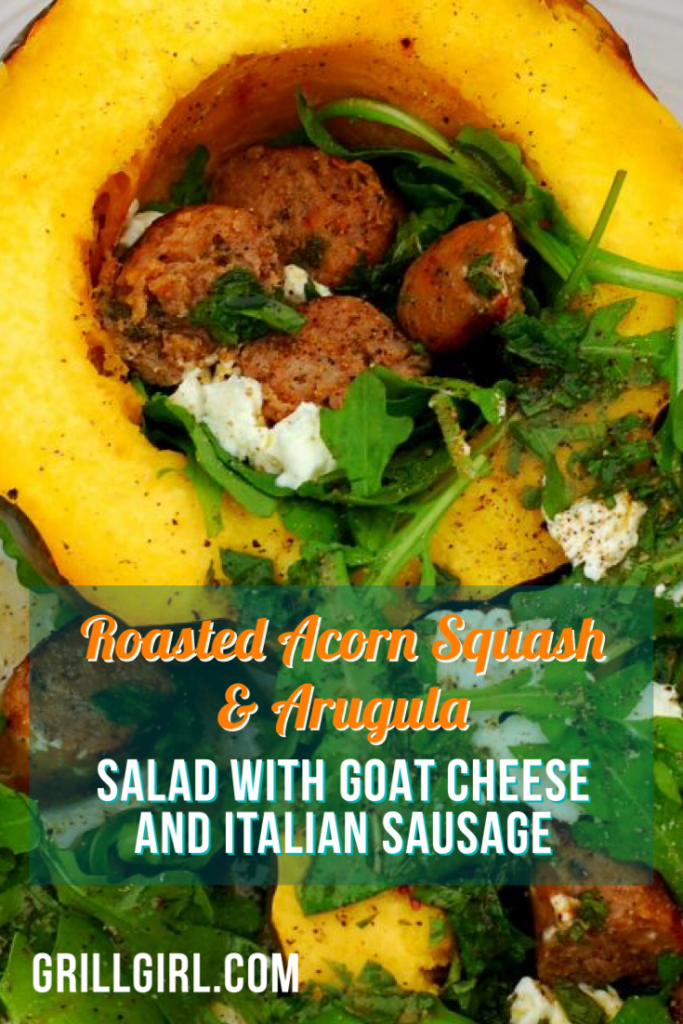 Roast the Acorn squash in a 375 degree oven for 45 minutes or until an internal temp thermometer reads 150 degrees (I prefer the Chef Alarm for these type of recipes so I can monitor the temp). Meanwhile, heat a grill to medium high heat and grill Italian sausages until they’ve reached an internal temp of 145 degrees. Remove from grill and set aside.

Meanwhile, combine the dressing ingredients- I used an immersion blender but you can combine with a whisk as well. Once the Acorn squash have reached 150 degrees, take them out of the oven, slice them in half lengthwise, an let them start to cool. Scoop out the seeds on the inside before serving.

Put 1 squash half on each plate- it will serve as its own salad bowl. Add arugula, goat cheese, dressing and chopped Italian sausage evenly among the bowls.

Serve immediately. This is a hearty salad that embraces the flavors of fall. Have a favorite hearty dish your family loves? Please englighten me and my readers with your ideas below! 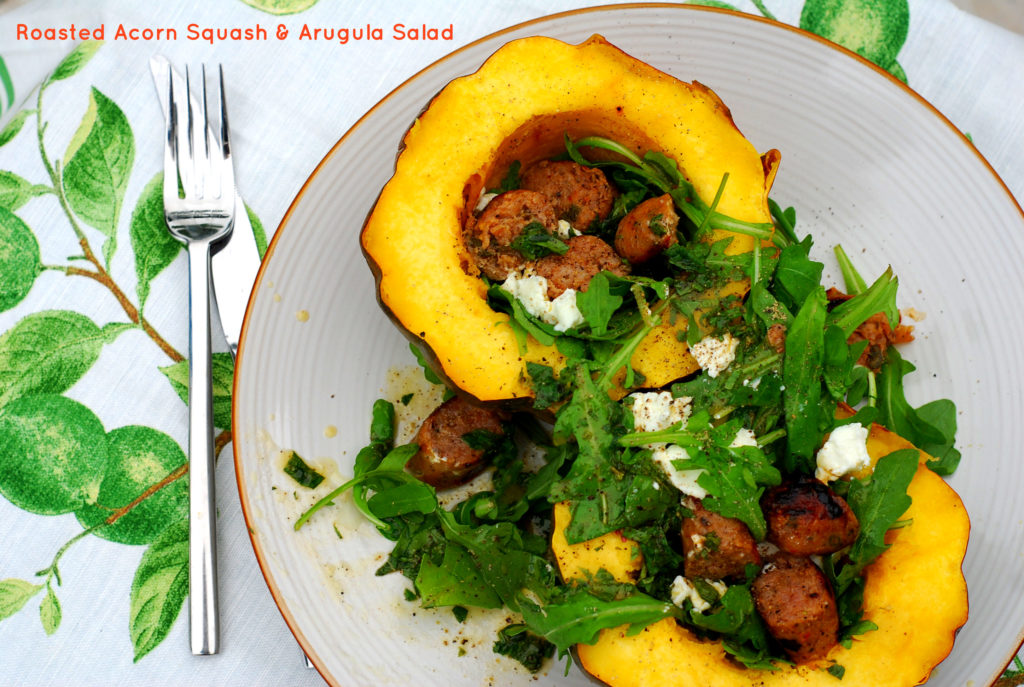 This recipe was inspired by Francis Mallman’s Rescoldo technique, which entails roasting vegetables in hot embers.