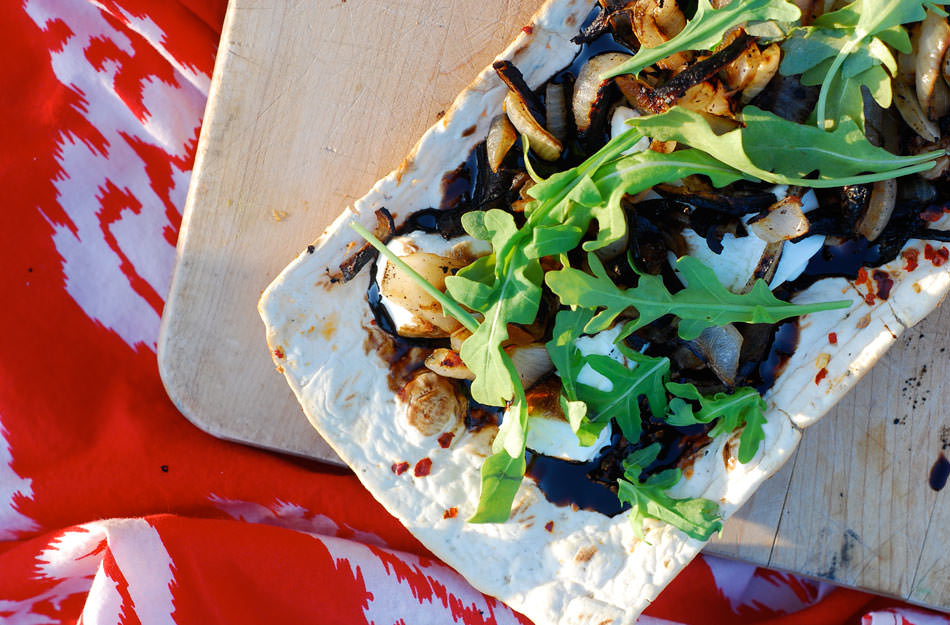 I really love it when Vidalia onions come into season in the summertime. Their sweet, mellow flavor really compliments any recipe. I was super excited when Shuman Produce, a grower of Vidalia Onions, reached out to me and asked me to develop recipes for them. It is always fun to create recipes with one of my favorite ingredients! That is where the inspiration came for these grilled Vidalia Onion pizzas came from. I sliced the onions in thick slices, and coated them with a balsamic while on the grill to help them caramelize. I then grilled the pizza and used a balsamic glaze base, goat cheese, Vidalia onions and then topped with peppery arugula. There will be NO LEFTOVERS with these pizzas- I promise!

Preheat your grill to 350 degrees creating direct and indirect grilling zones (on a charcoal grill, this means pushing the coals to one side so, on a gas grill this means one burner on high/two off). By using the indirect heat side of the grill, it will simulate a “pizza oven”.

While the grill is heating, slice the onions in medium thick rings. Next, oil the grill grates with canola oil so the onions and pizza will not stick.

Grill the onions on direct (on top of the coals or burner with gas on) heat for 4-5 minutes per side, or until they being to develop nice deep char marks. Baste the onions with balsamic vinegar as they grill to help them caramelize on the grill.

Once the onions are done, pull them off and put them on a cutting board where they can cool. Once they cool, cut them into smaller pieces.. Meanwhile, roll out your pizza dough on a well-floured cutting board.

Again, make sure your grill grates are well oiled so the dough will not stick. Place the dough on the grill grates on the indirect side of the grill and let it cook for 4-5 minutes or until char marks have formed on the under side and the bottom is beginning to brown. Flip the dough over to cook the other side for the same amount of time. Meanwhile, add the balsamic glaze as the “sauce” that forms the base of the pizza. Next, place tablespoon sized scoops of goat cheese all over the pizza. Next, add the grilled onions. Let the pizza “bake” with the lid on for 4 minutes or until the cheese has melted and char marks have formed on the bottom crust.

Remove the pizza and place on a large cutting board. Sprinkle with arugula for garnish. This is a great pizza as a standalone dish or is also great served in smaller servings as an appetizer.

Recipe notes: I’ve made this recipe with both thin crust pizza dough and “Flat Out” brand flat breads. They both turned out great- in the case of the “Flat Outs”, they are thinner than pizza dough and will therefore cook faster on the grill. 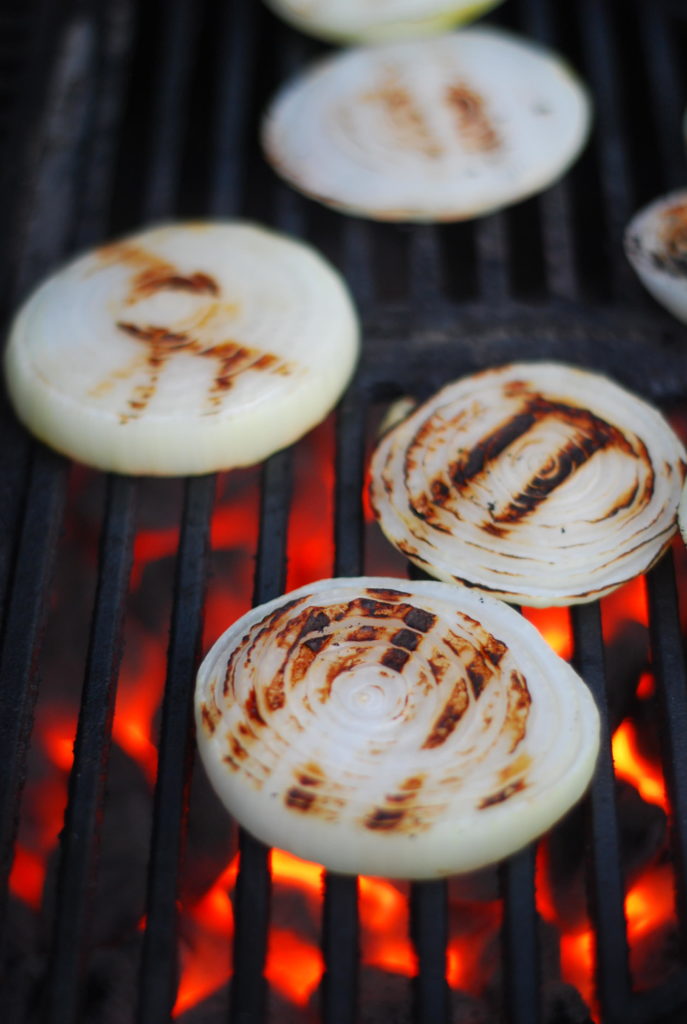 I love onions on the grill- they get sweet and smokey!