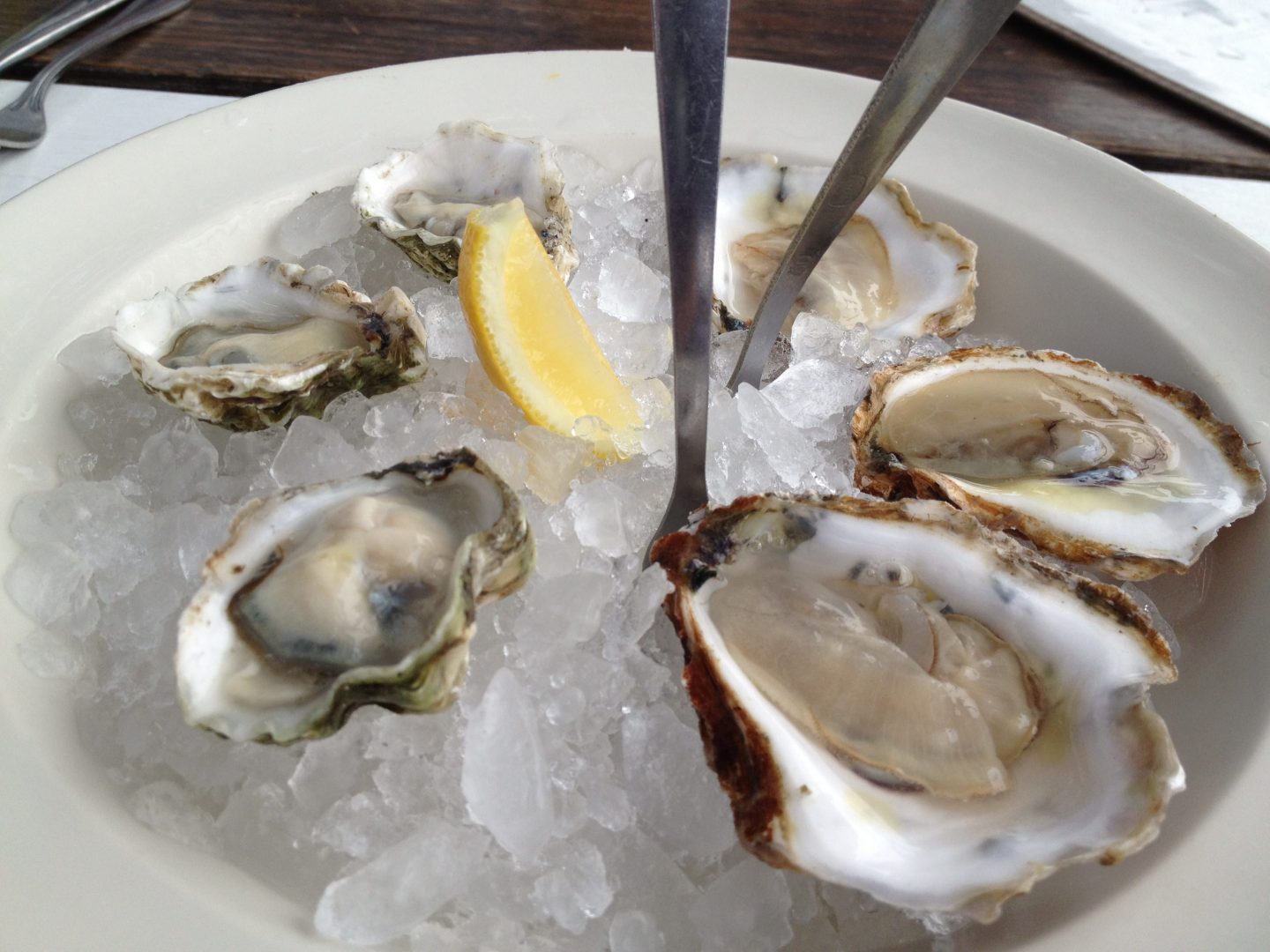 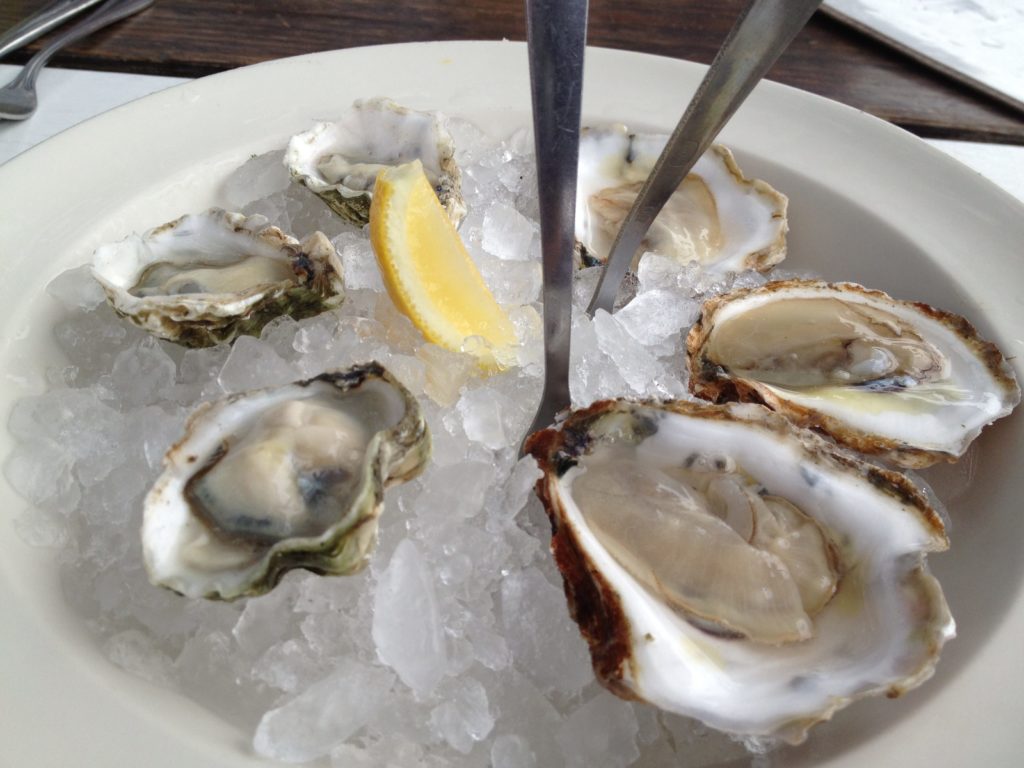 After I got chopped for my Oyster dish, everywhere I went I saw Oysters! I love oysters so I got back on the horse and have grilled them, successfully, a few times after we filmed the episode.

Well, here it is the night before my Chopped episode and I am finally sitting down to write this blog post. I’ve been thinking of this blog post and how cathartic it would be to write over the past 5 months, but in the meantime I’ve built it up so much in my head that I have now been procrastinating writing it.

So, by now you’ve all see my Chopped Grillmasters Episode and saw me get voted off the island (figuratively) for my Oyster debacle. I’ve been internalizing that dish for past months- how will it look on tv, and thinking of all the different ways I could have done the dish differently and spent my time more wisely.

One of my biggest fears about going on the show was about not doing well and looking bad on TV. I know it is great just to be invited onto the show, and I was completely flattered to be invited to try out, but I’m also quite a perfectionist and was really hoping to do well! Not being professionally trained and one of the younger participants on the show, I definitely felt intimidated. The show had Sam Choy (who’s competed on Iron Chef!!), and Dr. BBQ- need I say more?!!

So, when I said on the show “If I get voted off first- I will need major therapy” – I was not kidding. Since I got back from Arizona, I’ve been rehashing those damn oysters, the things I did wrong- how I could have done it differently, ad nauseum. In fact, after the show- I’ve never had as many encounters with oysters before. Everywhere I go- Oysters!! It’s like the God’s are rubbing salt in that wound!

Here is the first time I grilled oysters, as documented on my blog over 3 years ago. Definitely a better grilled oyster experience! Paired with the jalapeno lime butter- this recipe is a winner!

Despite all my worry, the entire process made me a much better chef! As with all things in life, if you don’t put yourself out there- you won’t learn anything or grow as a person. And that is how I feel about my experience with doing a reality cooking competition!

Once I learned I made the show- I went into prep mode. My husband Scott was a great sport and would go the store, buy the most random and (sometimes) repulsive ingredients he could find, hide them from me, and then “unveil them” and announce the episode round (app, entree, dessert) and how much time I had. Scott, playing the part, would talk in his “Ted Allen” Host Voice and say “Chef Robyn, tonight you have canned eel, and cactus fruit to make an appetizer- Go!” 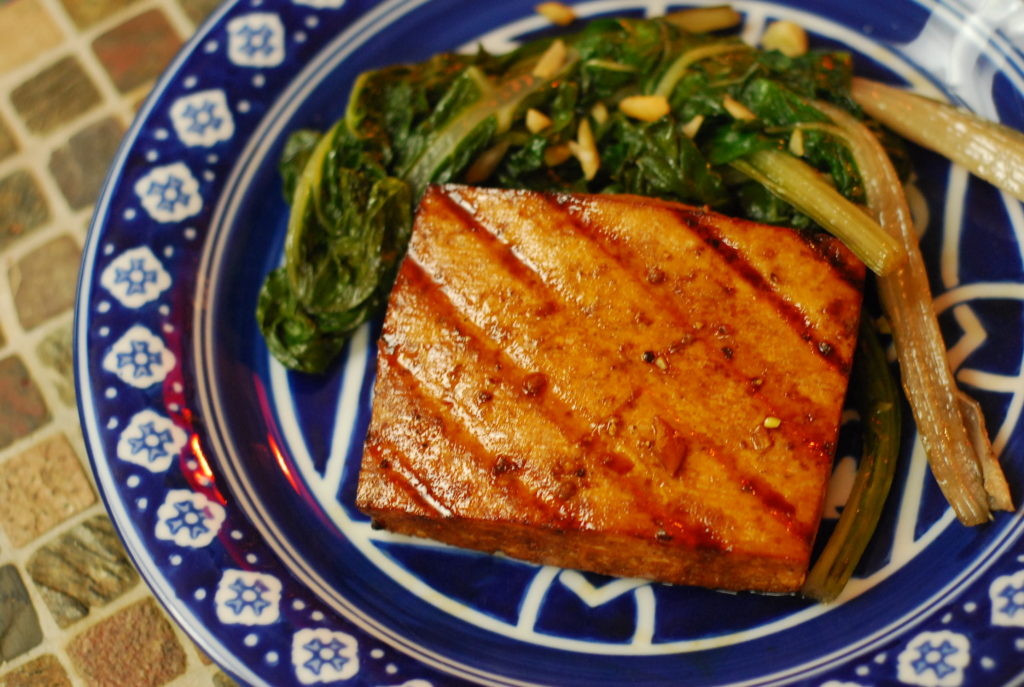 Soy marinated tofu with bok choy sauteed in garlic and mirin. – During preparation for Chopped Grillmasters, I practiced grilling tofu many times. I felt for certain that tofu was going to be an ingredient and I wanted to be prepared. The key to grilling tofu: 1) Remove all the moisture by wrapping in paper towels and expressing the water out by putting pressure, such as with a tin can, to add weight to get more water out 2) Marinate- tofu has no flavor so you gotta marinate it with soy sauce or something with lots of flavor 3) Oil the grill well. If a tofu steak sticks to the grill, you will have to start over!

During this time, Scott brought home a coconut and whole fish for the dinner portion, cookie crisp and lychee berries for dessert- you get the picture. It was in my attempt to chop a coconut that I put a huge gash in my best knife, and then proceeded to take the coconut to the patio and throw it on the ground to effectively open it up. I just couldn’t get the damn thing to open! (Before I went on, I also tried this over and over again, in addition to watching countless youtube videos). My goals was to try to practice things that the professionally trained Chefs would already know how to do and could do it quickly.

With the fish, I was trying to teach myself to filet a fish quickly, and grill it in under 30 minutes. That night I did a grilled snapper with coconut lime compound butter (made from my patio coconut) that was actually very good. I think I would have made it to the next round!

Through all of this I found that time after time, dessert was always my strong point and the appetizer always came in last. Unfortunately on the Real Chopped, if you don’t make it past the appetizer round, you can’t redeem yourself with the entree or dessert! 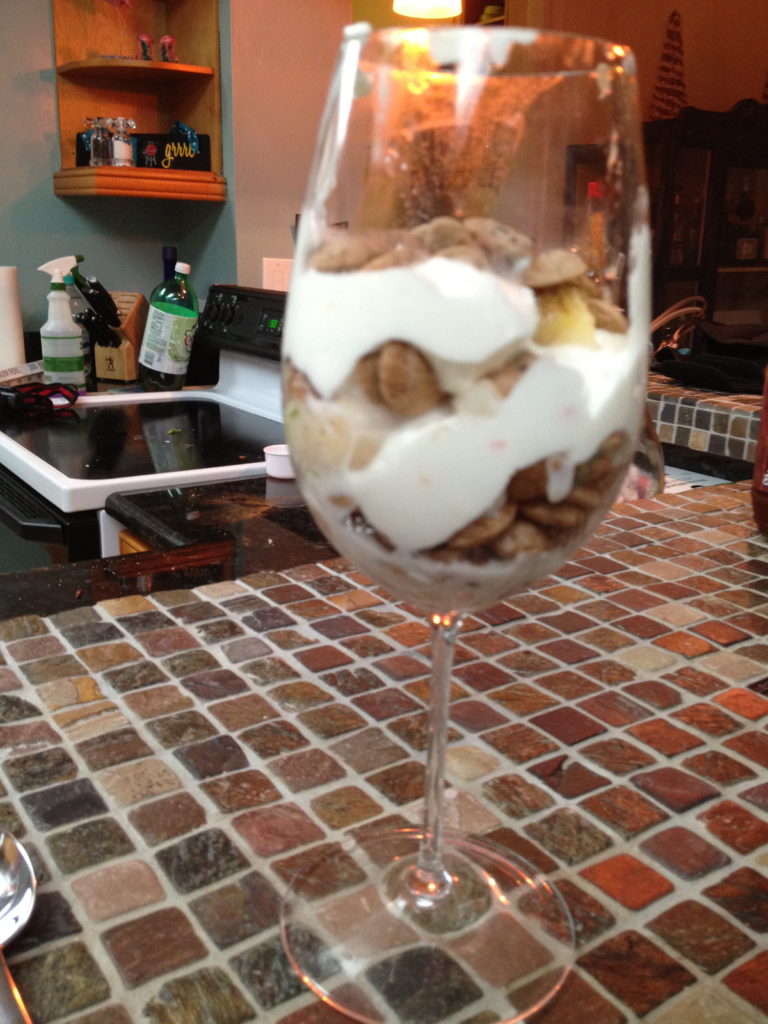 My grilled banana, cookie crisp, lychee berry and cointreau infused whipped cream parfait- the result of my own personal “chopped”.

My favorite dish that pushed my culinary creativity was with the cookie crisp cereal and canned lychee berries that Scott brought home for dessert. I toasted the cookie crisp on the grill, caramelized grilled bananas and then layered them as a parfait with cointreau infused whipped cream, along with the lychee berries, and knew I had a winner. Dessert on the grill agrees with me- probably because I’ve always had a sweet tooth!

I also religiously studied the Flavor Bible book, so I would know which ingredients and

flavor profiles work together. (I recommend this book to anyone who likes to cook-it really shows you how different ingredients compliment each other). 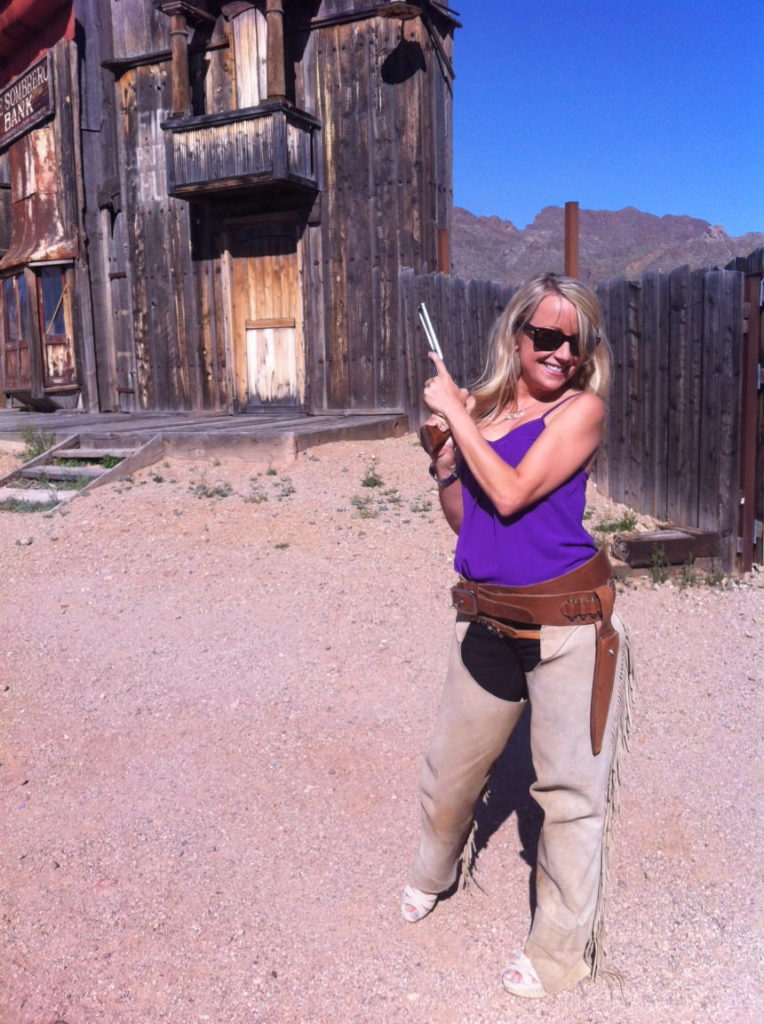 me, wearing chaps on the set of Chopped Grill Masters. I’ve never worn chaps before this- it was quite the experience!

So, despite my getting voted out early, and then internalizing and stressing about it for over 5 months, I don’t regret doing the show. I met some really awesome people on the show like Doug Keiles from New Jersey, Tim Grandinetti from Winston Salem, NC and Ernest Cervantes from Texas- who were all really great people to meet and exchange ideas with. The producers and everyone I encountered from Food Network were nice, extremely professional and  very creative which only justified my positive sentiment of the network. 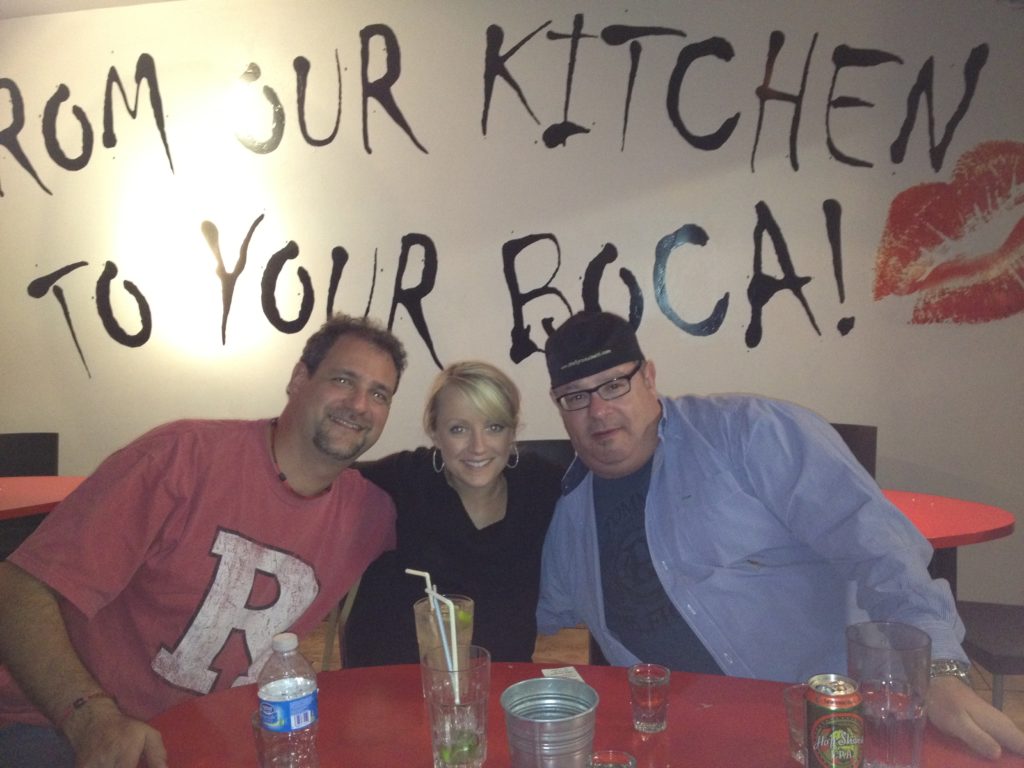 Having dinner at “La Boca” with my competitors, Doug Keiles and Tim Grandinetti.

I know that I will continue to hone my skills and this experience only broadened my realm of experience. What a cool concept to incorporate professionally trained chefs, competition BBQ champs, the culinary Ambassador of Hawaii, and even a wacky, grill obsessed blogger- to mix together in a cooking competition set in Old Tucson, Arizona??!!! How awesome is it that I’ve grilled Oysters in the heart of the desert where they used to film old John Wayne movies??

Despite how I did on the show, I’ve checked off another box of cool experiences to add to my list! Thanks for the opportunity Food Network!