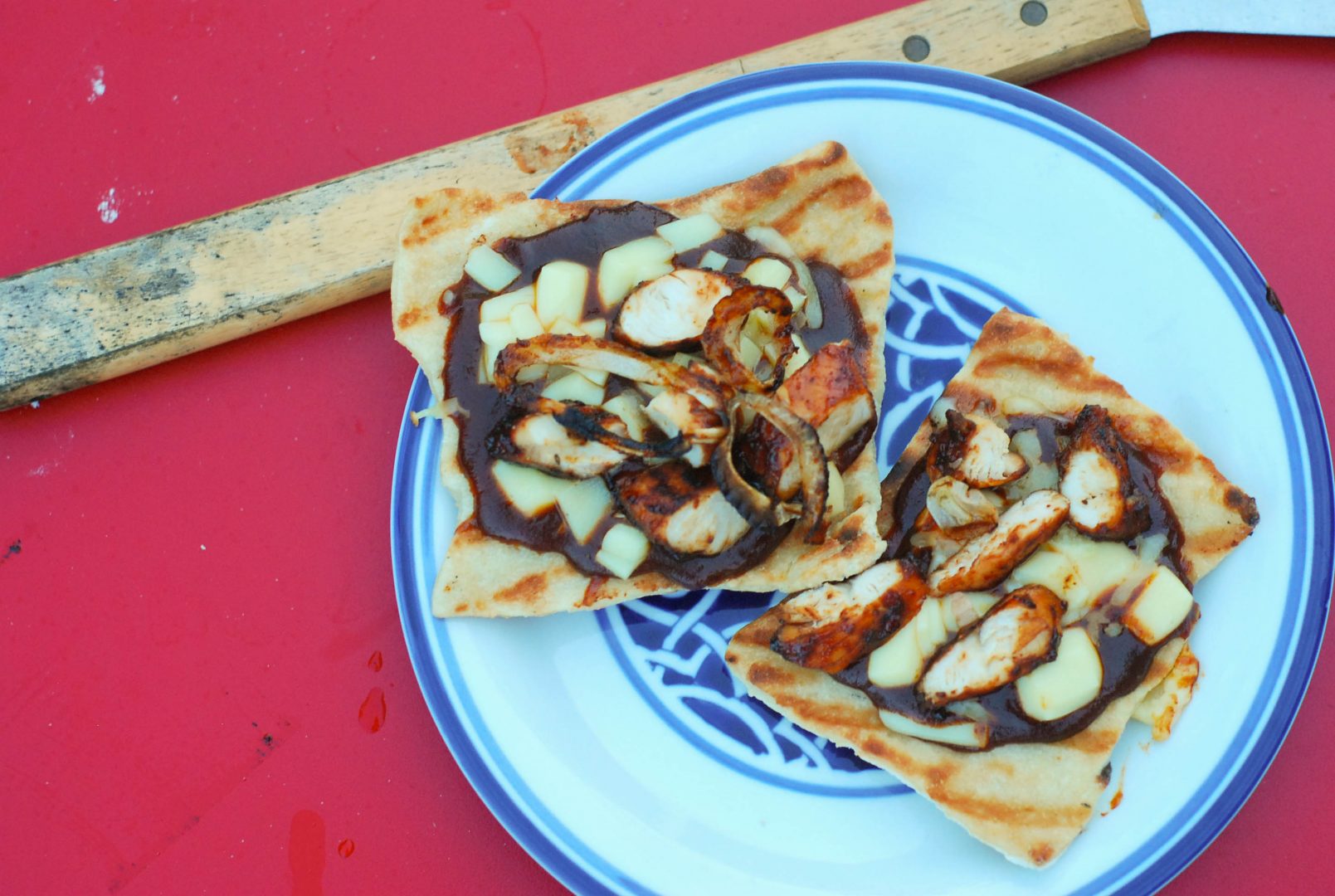 I’ve had barbecue sauce on the brain lately. Probably because I get sent a lot of BBQ sauce and I’m always trying to incorporate it into new recipes. But when smoking something, I usually like to make my own sauce. So, what to do with all that lovely BBQ sauce? Make BBQ chicken pizza, of course!

This pizza calls for 3 rounds of BBQ sauce in different components, so you can mix and match your favorite flavor profiles and see if they play nice together. On this occasion, I used what I had on hand as I don’t like to let good BBQ sauce go to waste.

I marinated the chicken in Pork Barrel BBQ sauce. Next, I used some Stubb’s Sweet Heat for the first half of the sauce base on the pizza and then switched to their bourbon whisky for the 2nd half. Then I basted the onions with BBQ Sauce to make them get crispy while they grilled. Then, I used more BBQ sauce for a dipping sauce at the end. This recipe is great for finishing up all those half empty (or half full if you are an optimist!) bottles of BBQ sauce in the fridge. (If you are like me, condiments and sauces take up half your fridge!) 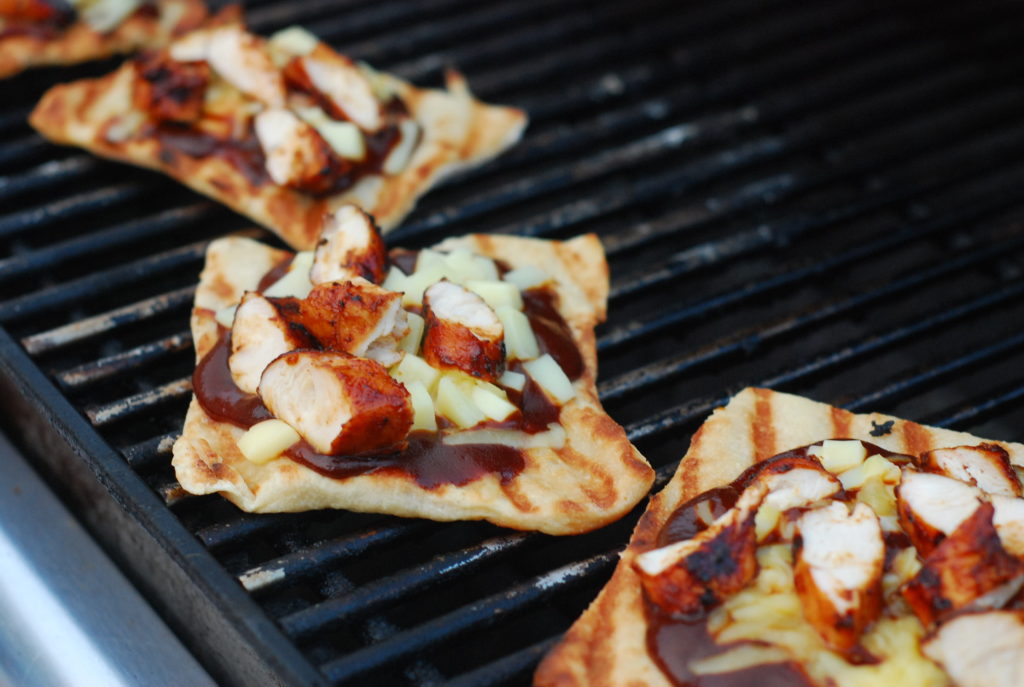 Look at those beautiful char marks!

Preheat a gas grill to medium heat. Oil the grates with canola oil and make sure they are well coated so the chicken and then the pizza dough does not stick.

Marinate the chicken cutlets in BBQ sauce for 15 minutes in advance (if time permits) and grill on 350-400 degress/medium heat until internal temp reaches 165 degrees, baste with additional BBQ sauce for extra flavor. Grill the onions, glazing them in bbq sauce, until they begin to

get crispy. Remove Chicken and tent under foil. After they have rested, slice them into pieces.

In the meantime, dust the cutting board with flour or cornmeal so the dough does not stick. Roll the pizza dough out into one gigantic square (which is usually the size of a medium/large cutting board).Next, take your dough and cut it into 10-12 squares with kitchen shears.

Place the pieces on a well oiled grate on medium heat. Cook for 3-4 minutes or until char-marks have formed. Turn the heat down to medium (on charcoal, close the vents) and flip the pizza pieces. Now start adding toppings. Spoon a generous amount of BBQ sauce, cheese, sliced chicken and onion pieces each mini pizza. Close the lid and let the cheese melt into the toppings, about 3-4 minutes.

Once the cheese has melted, remove the pizzas and serve immediately. 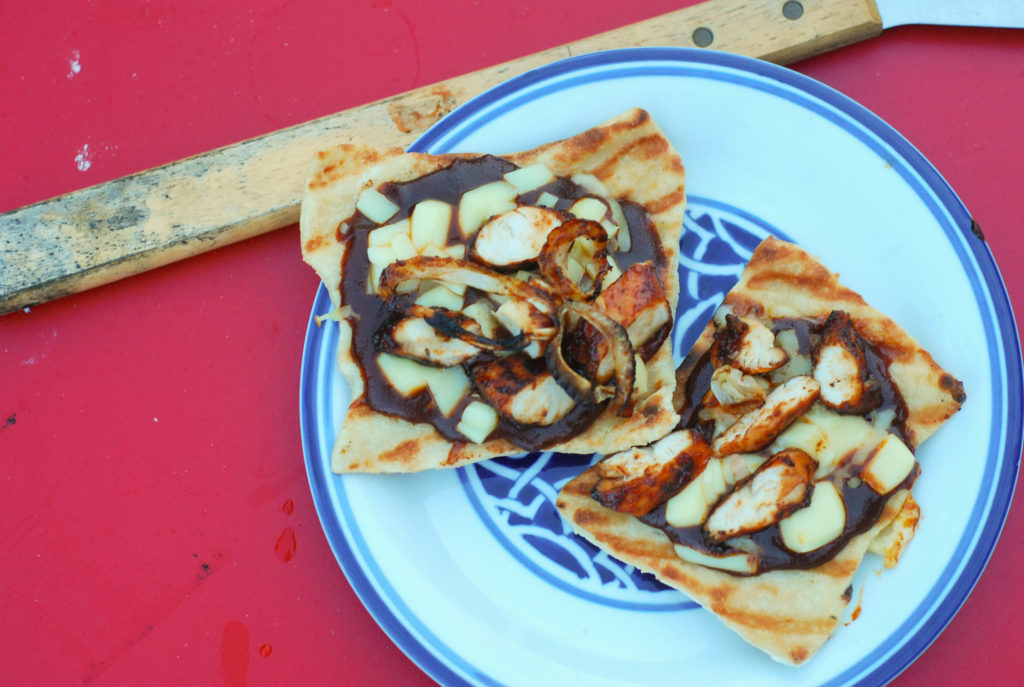 If you love BBQ Sauce and Pizza on the grill, this pizza is for you!