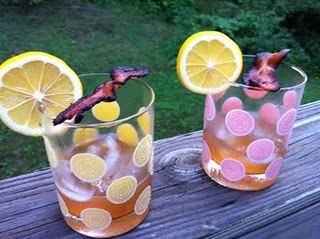 Wow. You guys really outdid yourself on this one. So much so that I had to pick 2 winners!! See all the comments on the original contest post to see all the honorable mentions including a whiskey cream sauce, cedar planked salmon with Jack, and some great Jack infused BBQ sauce recipes.

The Ultimate Jack Dinner, courtesy of The Jacked Up Grill

Tonight we had the ultimate Jack Daniels Sunday Dinner!
It started with a cocktail: Grilled peach and Bacon infused Jack Daniels Old Fashioned.

In a cocktail shaker, add whiskey, ice, juice of 1/2 Meyer Lemon, a few dashes of bitters, and 2 tsp honey. Shake and strain into chilled glasses (2 servings). Garnish with grilled lemon and bacon strip.

Mix and seal with meat in a ziploc bag for at least 6 hours.
For steak sauce, heat in a saucepan until thickened to a honey-like consistency

Blanch peas, then place in ice bath. Finely julienne red pepper and apple.
For vinaigrette, stir all ingredients together, and then whisk very quickly while adding olive oil. Mix peas, apples, peppers and vinaigrette until everything is coated.

Pie crust recipe from Paula Deen, except instead of ice water, I used ice cold Jack.
Pie recipe came from another great blogger called Pie It Forward http://www.stlworkingmom.com/
For the whipped cream,

In a mixer, combine all ingredients and gradually increase mixer speed until cream is puffed up and firm enough to hold its shape. Spoon out as desired onto pie.

So there you have it! A subtle flavor of Jack from start to finish, and I can still type semi coherently at the end! Happy Grilling! 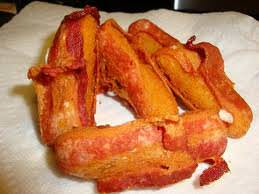 Wow, who would have thought of a smoked, bacon wrapped twinkie infused with jack daniels? photo is courtesy of meattruck.com

Jack Daniels is one of the easiest and tastiest ways to “help” get the grill going. If it’s cold out – a medicinal shot will get you through the cook. If it’s hot out, then mixing it up with some cola will hit the spot. If it’s perfect weather out, then mixed with some 7-up and a splash of Malibu Rum helps make a great day perfect. But using Jack as an ingredient? Best way I’ve used it is Smoked Jack Daniels Twinkies.

Wrap a full piece of Farmer John Thick Cut Maple Bacon around a Twinkie, Inject about 1oz of Jack Daniels into the center while slowly pulling the needle out – so you get even distribution of the Jack, and then smoke on an indirect fire at 250 – 300 F until the bacon is done. The Jack soaks into the cake adding the perfect balance of flavor to the filling and maple bacon, while the bacon gets crisp, so does the exterior of the twinkie.

To keep the kids quiet, just throw a few twinkies on – no bacon – and they’ll be done in about 10 minutes and while they’re busy eating theirs, the adult version will be finishing up and ready to enjoy!