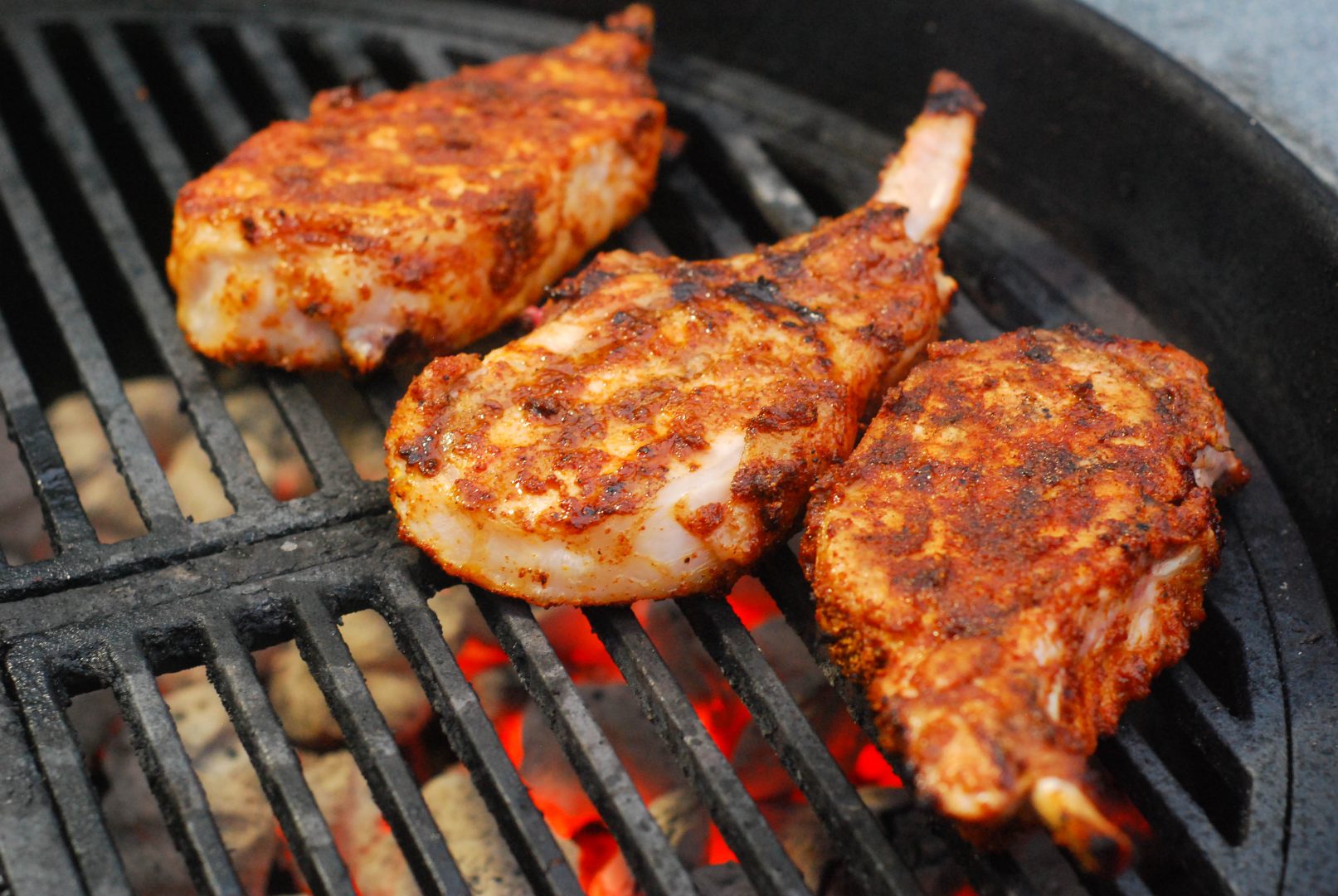 I’ve been hearing about this reverse sear method for a while now so I finally broke down and tried it with a beautiful set of Pork Rib Chops.

What is a Pork Rib Chop exactly? A pork rib chop is essentially a pork chop cut from the rib roast be can be boneless or served with the baby back rib attached (as seen below). You will occasionally see these “frenched” which means that the meat is removed off the bone resembling a popsicle stick.

Back to the Reverse Sear Method. My friend Larry from “Big Dude’s Eclectic Ramblings” mentioned this to me a few weeks ago and I couldn’t stop thinking about it.

So what is the big deal about the “reverse sear” method? All the research I’ve done says that the end result is more tender steaks. You can get into the nitty gritty about the effect of the enzymes in the meat while they’re on indirect temp, blah blah- but the bottom line is more tender steaks with great char marks. 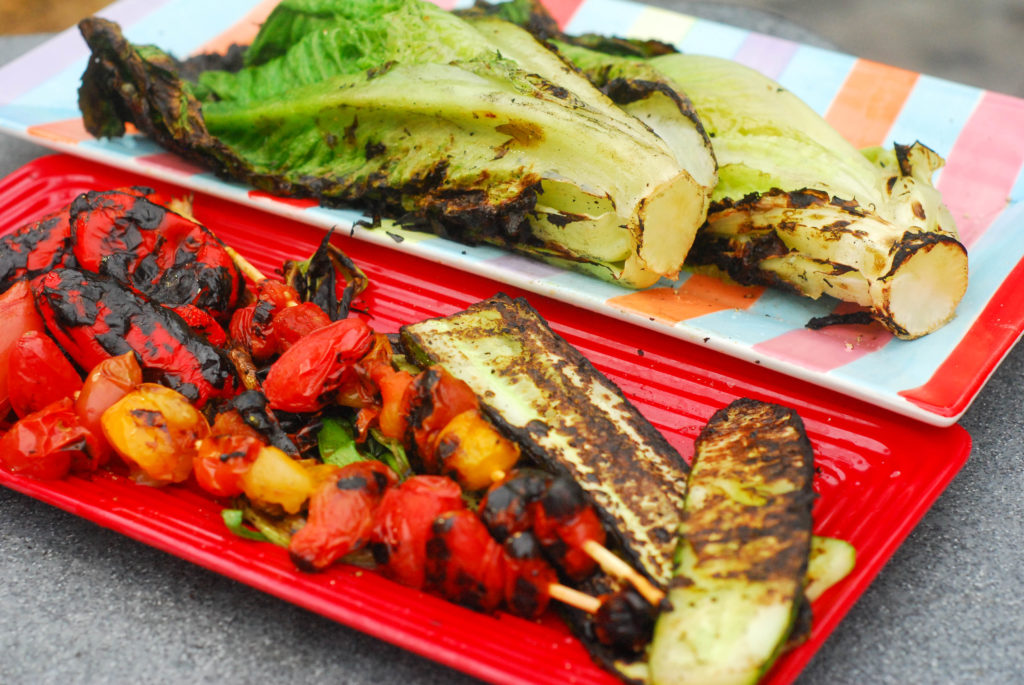 Grilling all the veggies for a salad (cucumbers, scallions, mini peppers and cherry tomatoes) and tossing them together with olive oil and parmesan is an easy, light salad for summertime and pairs well with any grilled protein.

I used my chipotle bbq rub on these and served them with a grilled romaine salad and steamer packet sweet potatoes and Scott told me numerous times during the dinner that this was the best meal I had made in a long time. So these got Scott’s seal of approval. He is, after all, my CTO (Chief Tasting Officer). The grilled romaine salad recipe is below – it’s one of those recipes that make you look like a grilling rock star and yet it’s so easy and great every time!

Combine all ingredients to make the rub.

Coat the pork with olive oil. Then, generously coat the chops with the rub on all sides.

Prepare the grill for 2 cooking zones- direct and indirect heat. Put the pork on indirect heat and let cook for a total of 6 minutes.

Next, put the pork rib chops on direct heat (at about 400+ degrees) to sear. Sear for 2-3 minutes on each side until char marks form and the internal temp reaches 145 degrees.

Tent the pork in foil for 10 minutes before serving so the juices have time to redistribute.

Grill all the veggies until a nice char marks form.  Slice the romaine hearts, peppers, cucumbers and scallions slices into small pieces. Toss the salad together in a large bowl and add olive oil, sea salt, pepper and a large amount of fresh grated parmesan. The grill adds such a nice flavor that dressing isn’t really needed and the fresh parm finishes it nicely.

Have you tried the reverse sear method? How did it turn out? I look forward to hearing your reverse sear experiences! 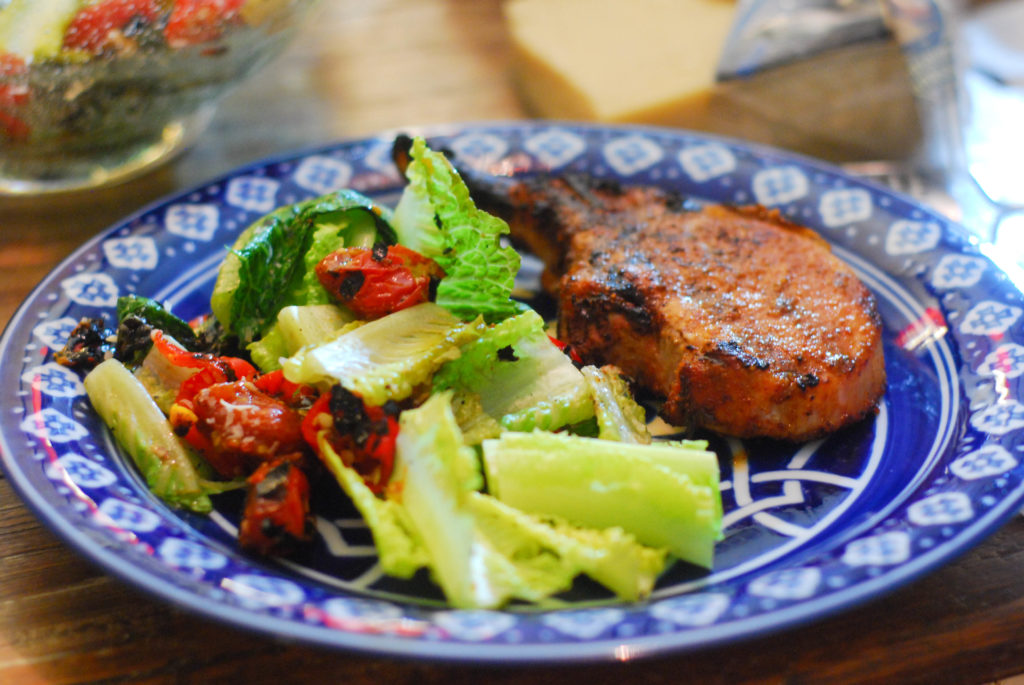 The rib portion of the pork rib chop is the most flavorful part of this cut. It absorbs all the rub and flavor of the meat and you are left wishing you had another! 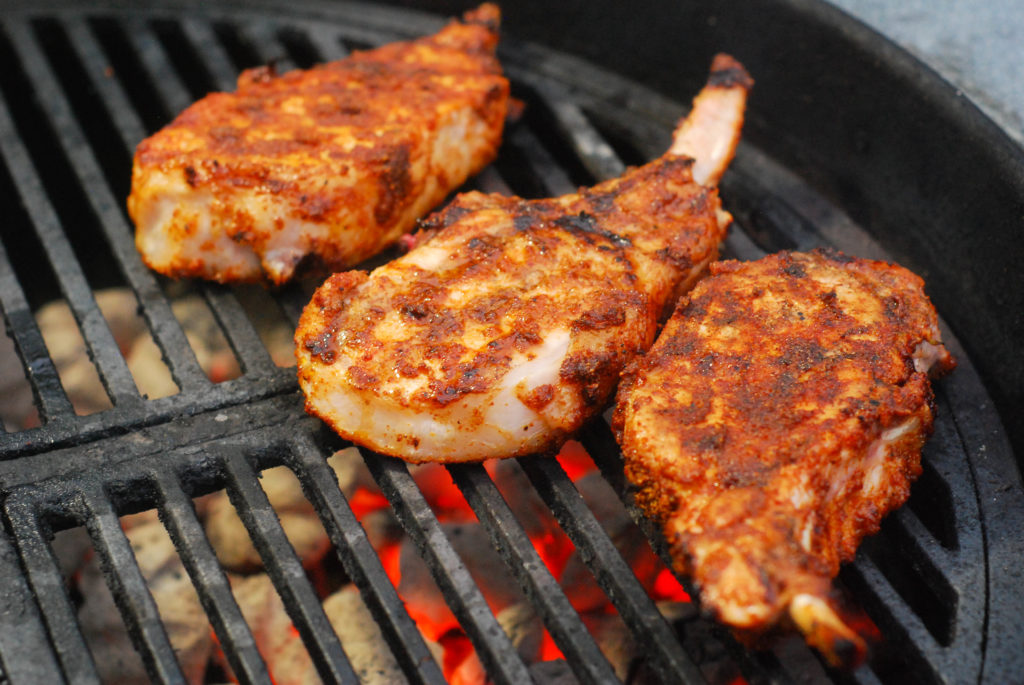 The reverse sear method produces a tender, juicy steak and nice char marks at the finish.